The Religious Track of the Cyprus Peace Process (RTCYPP) was one of the three case studies highlighted at a seminar on “Freedom of Religion or Belief in Practise” organised and hosted by the “Faith & Belief Forum” on 25 February 2021.
Peter Weiderud, Sweden’s Special Advisor on Religion in Peace & Conflict and Moderator of the RTCYPP presented the RTCYPP elaborating further how promoting ForB can be an essential tool in peacebuilding. “The dedicated trust of the religious leaders, combined with the long term support from the facilitation team and international recognition are the main reasons for the success of the Religious Track”, said Peter Weiderud in the seminar.
Kishan Manocha, Director of the OSCE Department of Tolerance and Non-Discrimination; Radia Bakkouch, President, Coexiste France and; Zainab Mohammed Ibrahim from the Development Initiative of West Africa also addressed the seminar.
Faith & Belief Forum is, an organisation in the United Kingdom that, for over 20 years has worked to build good relations between people of all faiths and beliefs. They were founded in 1997 as the Three Faiths Forum. Over the years their work expanded to include people of all faiths and beliefs, both religious and non-religious, hence the change in name in 2018, to the Faith & Belief Forum to better reflect this inclusive ethos. 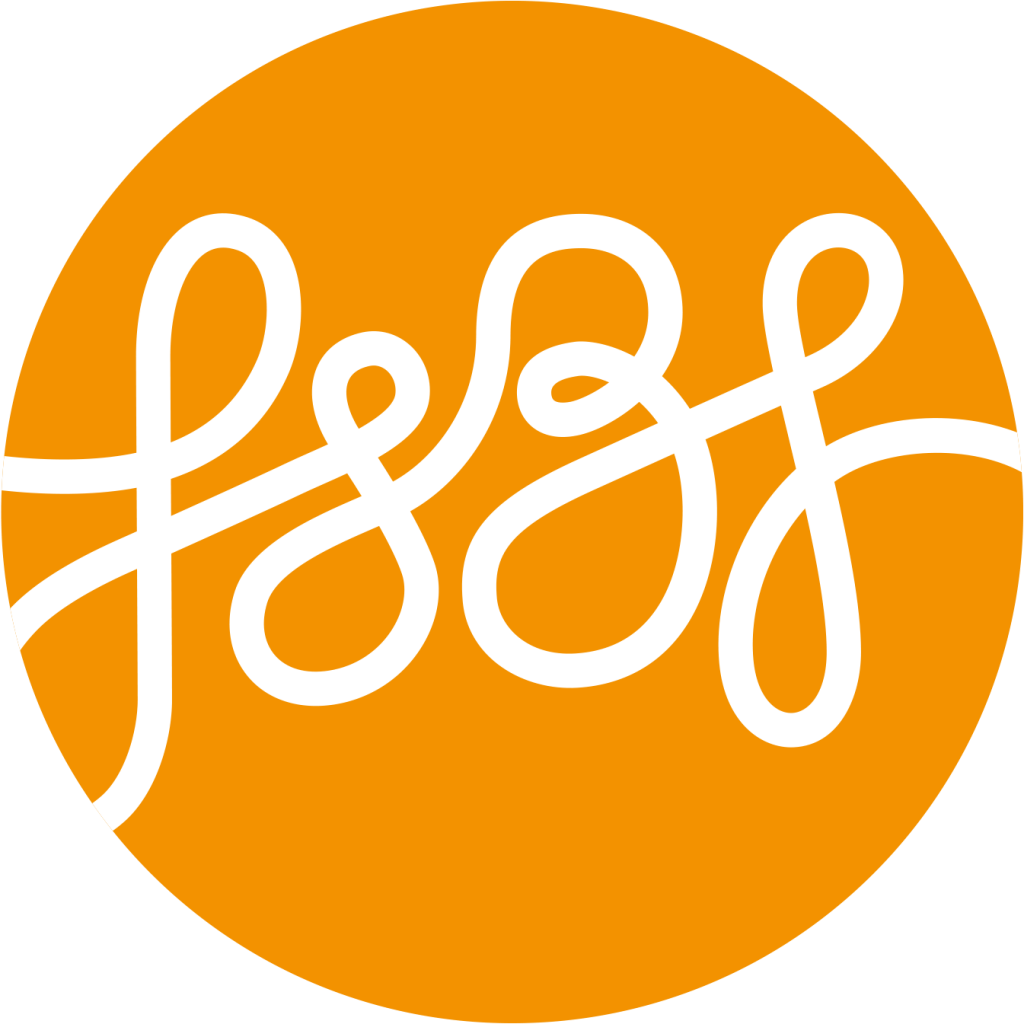 Executive Director of the Office of RTCYPP, Salpy Eskidjian participates in the webinar on “Diplomacy and Religion” and shares her knowledge and experience of the Religious Track of the Cyprus Peace Process under the Auspices of the Embassy of Sweden(RTCYPP).
During the webinar, organised by the Swedish Dialogue Institute for the Middle East and North Africa, four prominent speakers reflected on the importance of “religious literacy” for diplomats, the role faith-based organisations play in peace and security, as well as socio-economic development.
Illustrations from Cyprus, Jerusalem and Riyadh showcased why it is important for diplomats and staff of intergovernmental bodies, development agencies and others to have basic knowledge on religion and its interface with human rights, peacebuilding, development & human security.
“Initiatives that introduce and enhance religious literacy in the world of diplomacy are extremely timely, needed and very welcome”, said Salpy Eskidjian. "We note the positive impact of various aid programmes when EU, the UN and member states involve or engage with faith communities and their religious leaders, especially in places where faith and belief play a large part in shaping customs, practices, identity and frameworks of well- being. Grateful to have had the opportunity to share about the RTCYPP which remains a unique example of religious diplomacy in a protracted conflict, not just in the region but globally, supported by the Ministry for Foreign Affairs of Sweden since 2010. “
The virtual meeting brought over 40 participants from the Swedish Foreign ministry, embassies, SIDA and other specialized agencies.
The session was moderated by Ambassador Charlotta Sparre, Director of the Swedish Dialogue Institute; with Prof. Azza Karam - Secretary General of Religions for Peace, Ambassador Ulrika Sundberg - Sweden’s Special Envoy to OIC for Interreligious and Intercultural Dialogue, Mr Georg Andrén - Governor and Head of the County Administrative Board in Värlmand and Mrs Merete Bilde, policy advisor at the EEAS on issues at the cross section of religion and foreign policy as panellists. (RTCYPP News 23.2.2021)
Photos from RTCYPP Archives 2018 - Ambassador Olsson Vrang of Sweden hosts the first High Level meeting of the RTCYPP with the 5 main Religious Leaders Of Cyprus and the diplomatic corps. 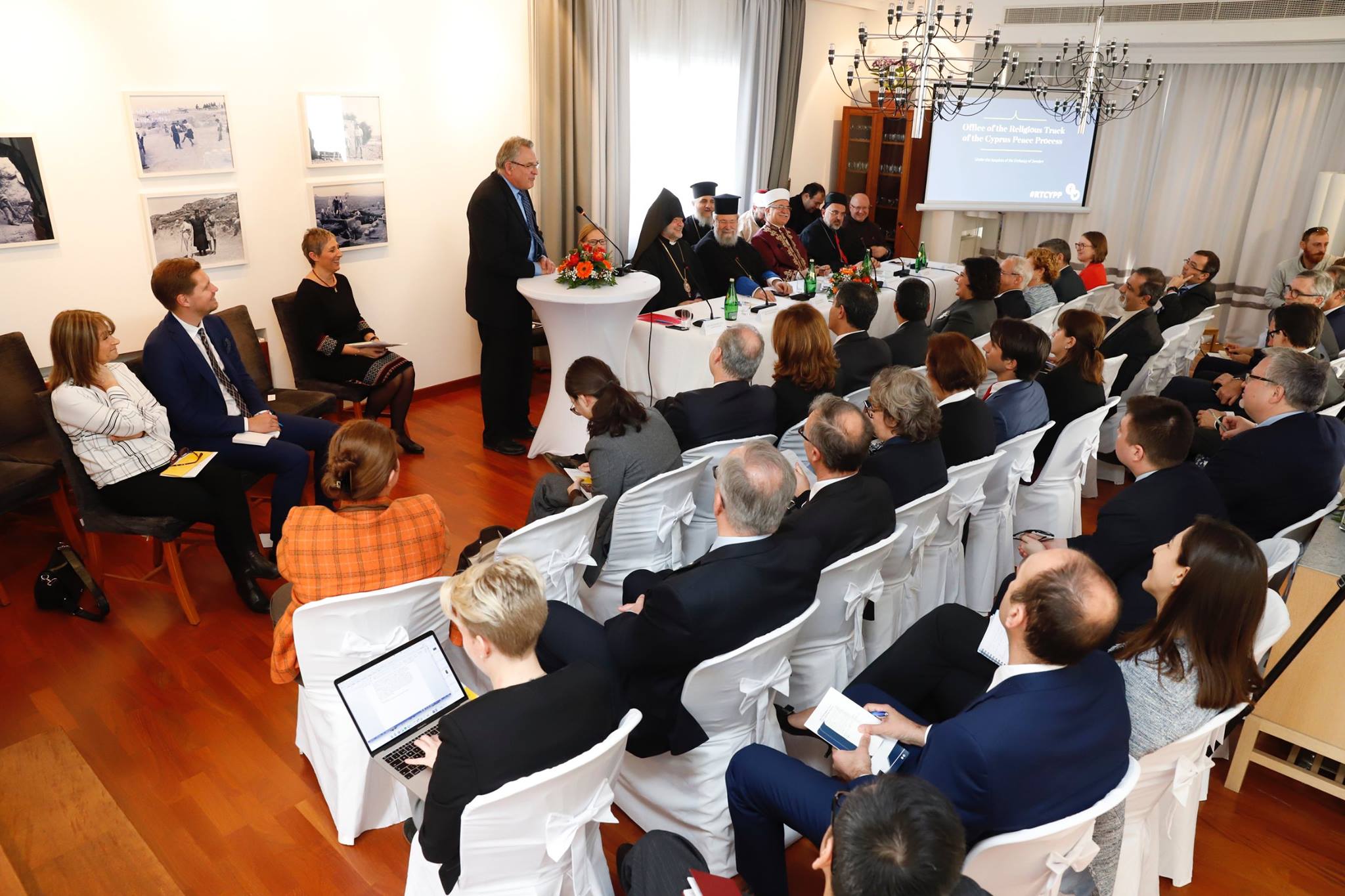 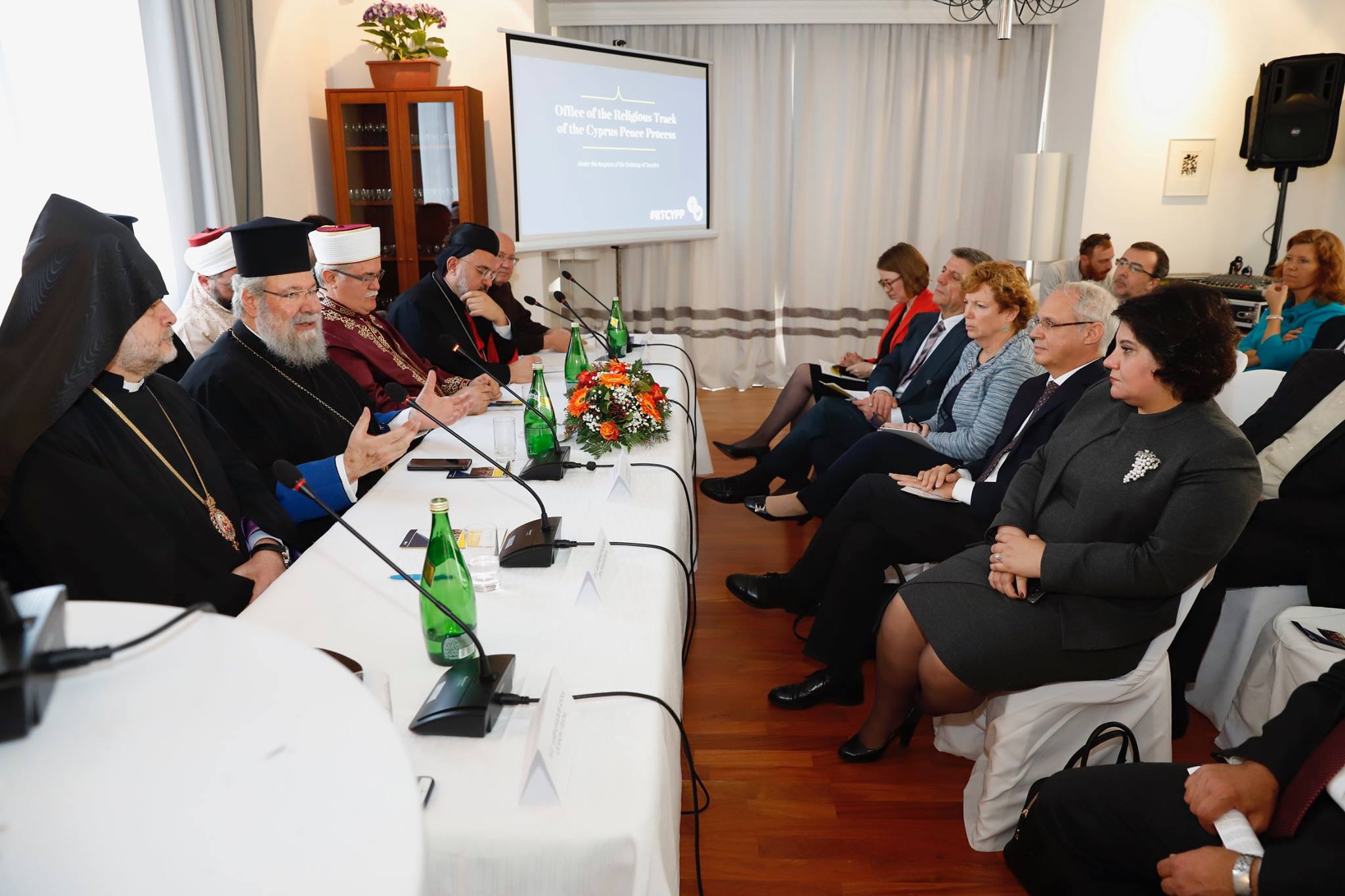 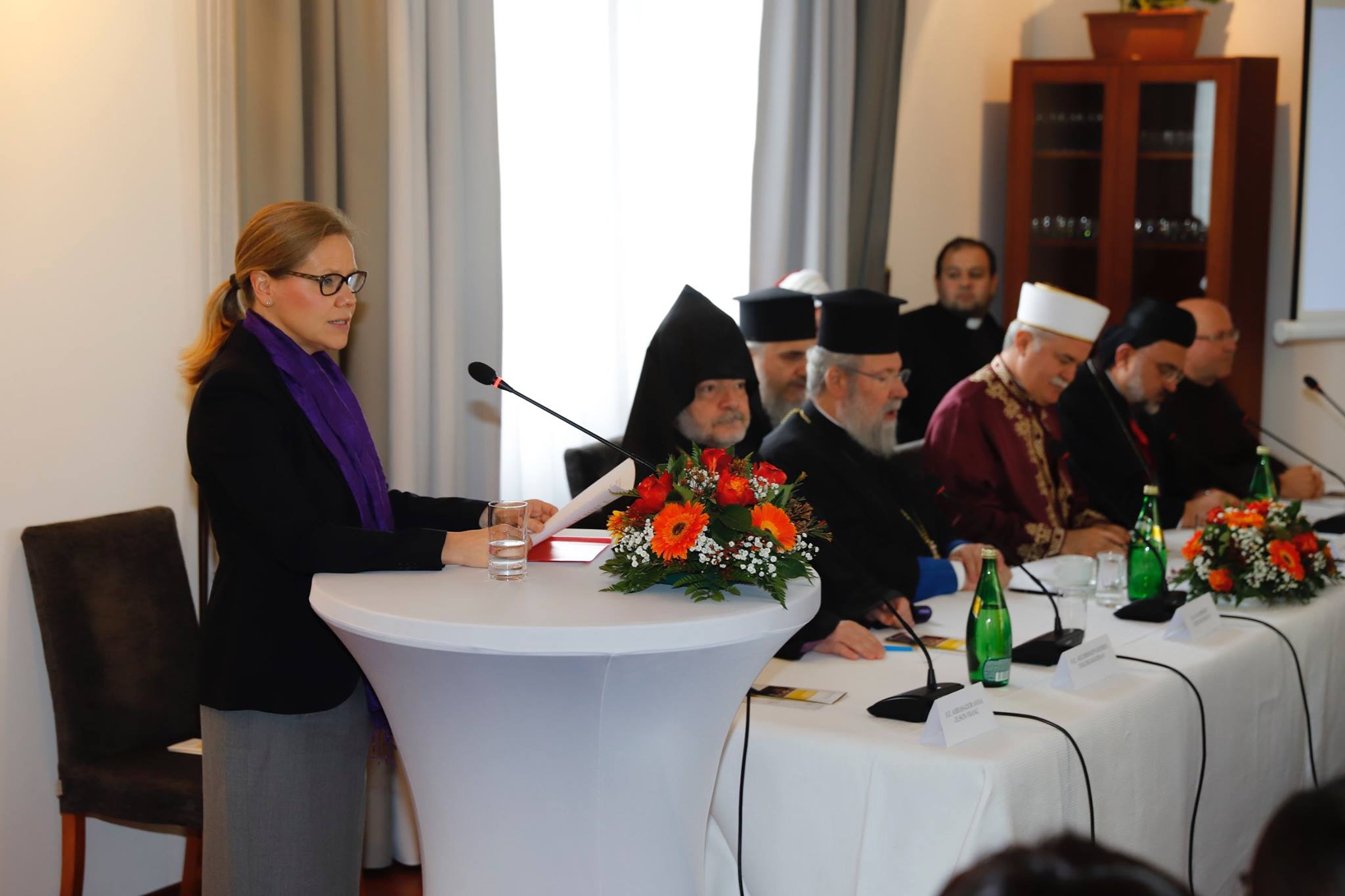 Please take a look at the video made by the OSCE Office of Democratic Institutions for Human Rights (ODIHR) launched to deepen understanding of the Freedom or Religion or Belief (FoRB).

The cooperation with OSCE-ODIHR will continue in 2021, especially since Sweden has taken over chairmanship of the OSCE as of January 2021. We are deeply honoured to be working together with OSCE ODIHR partners and to be under the Auspices of the Embassy of Sweden in Cyprus!

On the occasion of the feast of St Vartan, the Religious Leaders of Cyprus and the RTCYPP facilitation team send a message of congratulations and their best wishes to H.E. Archbishop Khoren of the Armenian Orthodox Church of Cyprus on the occasion of his Nameday.
(RTCYPP photo archives 2019-2020) 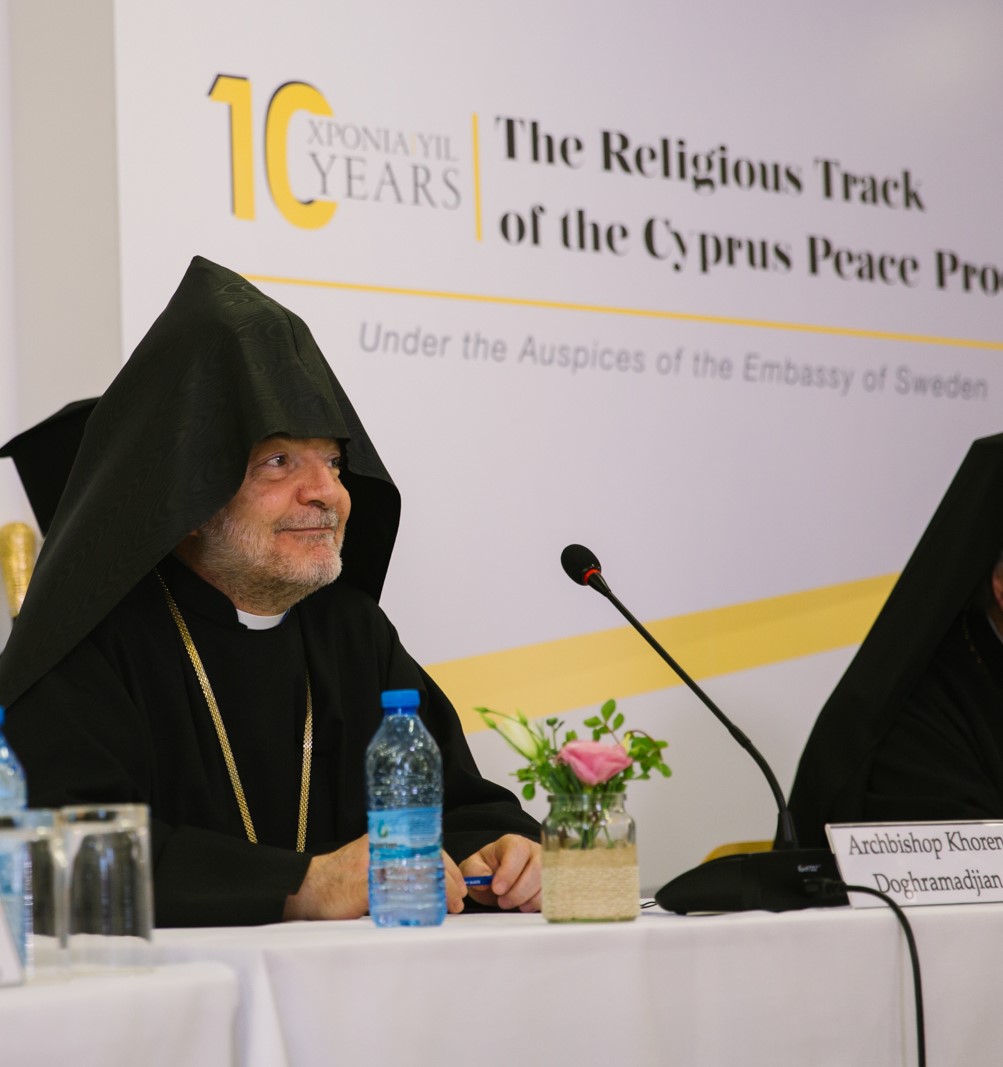 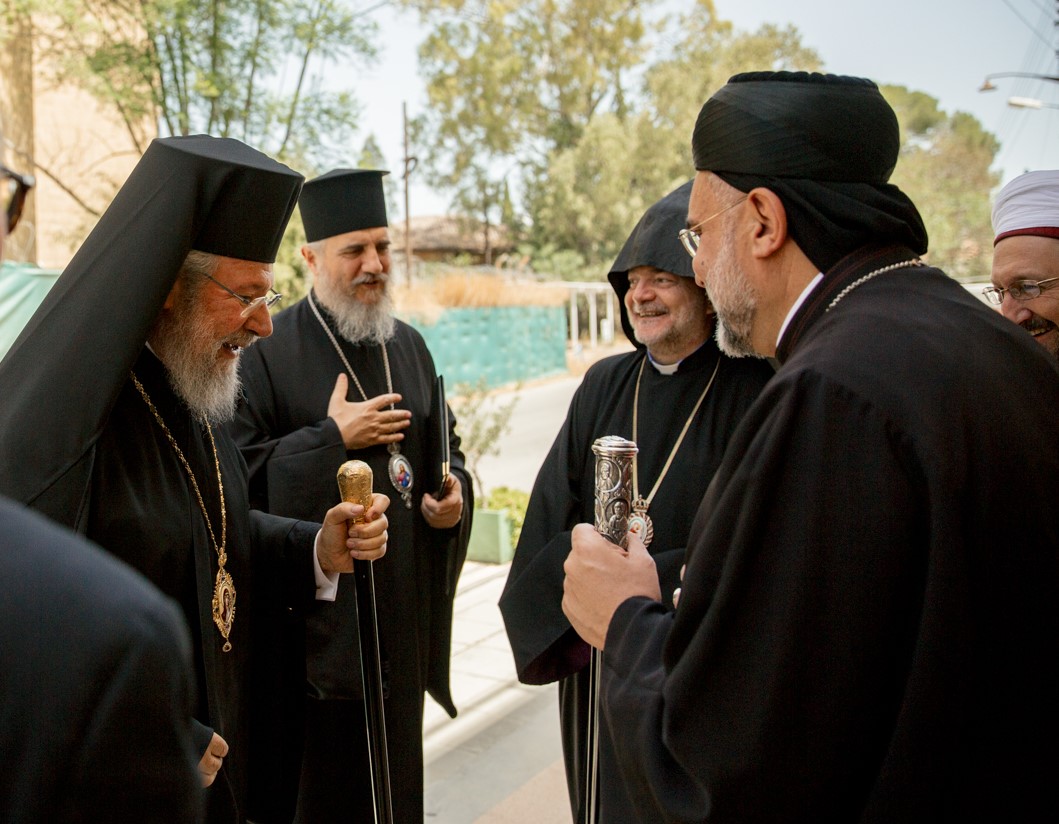 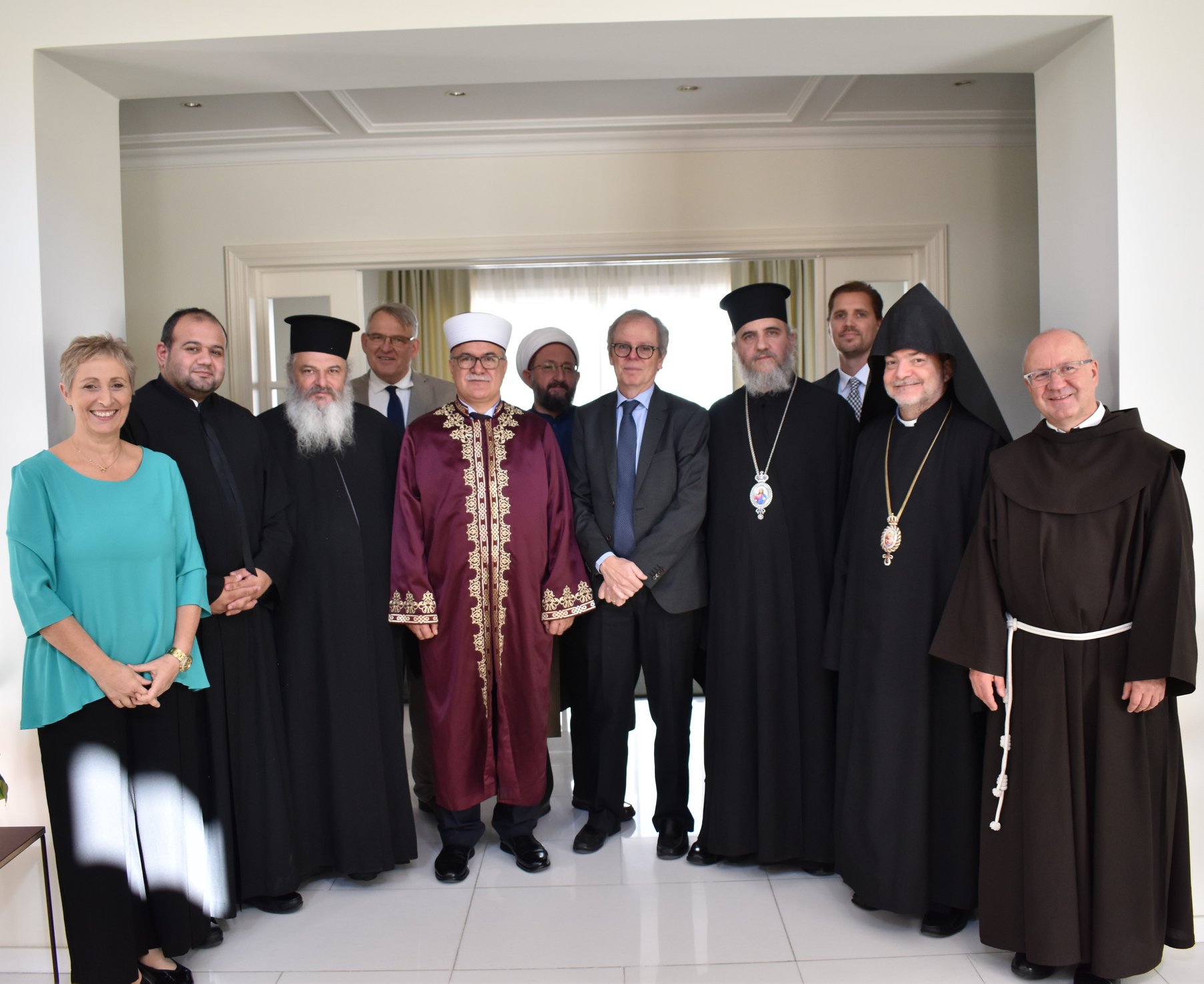 The Religious Leaders of Cyprus sent a joint letter to President Joe Biden of the USA congratulating him and Vice-President Harris for their assumption of high duties.
The five Religious Leaders of Cyprus had the privilege to meet with then Vice-President Biden in 2014, during his visit to the island and were grateful for his interest and support to their joint peacebuilding efforts, upholding and respecting religious freedom in Cyprus within the framework of the RTCYPP.
The letter was handed over to H.E Ambassador Garber of the USA by the facilitator of the dialogue and Executive Director of the Office of RTCYPP, Salpy Eskidjian. During the meeting with Ambassador Garber, Mrs Eskidjian shared the main concerns of the Religious Leaders for religious freedom in the island, co-existence between Christians and Muslims and the peaceful settlement of the Cyprus conflict. Mrs Eskidjian assured the Ambassador that with the help of the Ministry for Foreign Affairs of Sweden, Office of the RTCYPP will continue to accompany the Religious Leaders and would welcome the support of President Biden’s administration
“The Religious Leaders are conscious that mistrust feeds on unattended memories of the past full of pain and continued violations of religious freedom, only to create obstacles to peaceful settlement of any conflict, including Cyprus.” Said Eskidjian. “We appreciate the genuine interest of Ambassador Garber and her support to the RTCYPP. We look forward to continue to work together with the US Embassy to advance religious freedom and build on our cooperation to tackle human trafficking.”
(RTCYPP photo archives 2014)