RTCYPP Language Classes concluded it’s fourth successful semester and welcomed Ambassador of Sweden, Mrs Anna Olsson Vrang, who honoured the unprecedented initiative with her presence and handed certificates to the participants of the 2018-2019 term.

“The RTCYPP Language Classes are one of the most practical peacebuilding initiative and long term investment that gives me hope. I thank each one of you for being here”, Ambassador Olsson Vrang told the participants. “Learning each other’s language is a concrete way to contribute to further nurture mutual respect between the different faith communities of Cyprus and build trust through knowledge as well as interpersonal encounters.”

The Office of RTCYPP initiated the RTCYPP Language Classes in 2017 as a concrete confidence building measure with the approval, full support and blessings of the Christian and Muslim Religious Leaders of Cyprus. For the very first time clerics and laypersons from the mainline religious communities of Cyprus jointly started learning each other’s language.

Organized and hosted by the Office of RTCYPP, classes for Greek and Turkish took place weekly in adjacent rooms at the Home for Cooperation giving the participants a unique opportunity to come together to meet, interact, learn and practise each other’s languages in a friendly environment.   During this time, 25 clerics, laypersons, and nuns from five faith communities endorsed by their respective religious leader, have participated in the course learning either Greek or Turkish. The joint classes and excursions offered a unique opportunity for all to practise their newly learned skills with each other, enter a positive cycle of increased understanding and trust-building through getting to know each other better, and learn about each other’s traditions and cultures more closely.

“Learning and speaking each other’s language is one of the most significant steps toward a unified peaceful coexistence in a divided island where members of the two main communities do not know and speak each other’s language”, said the Director of the Office of RTCYPP Mrs Salpy Eskidjian. “We hope that the members of faith communities learning each others language can be role models in Cyprus, inspiring others to follow in their footsteps.”

The course participants thanked the Office of RTCYPP for this opportunity and the Ambassador of Sweden for all her support. All the participants echoed one another with the same heart-warming message.  “We thank you for providing us with this opportunity, not only to learn each other’s language but to have built friendships on a level we did not expect. We have become a family! We do not come here only as students to learn, we come here to see our family.” The Language Classes are part of the RTCYPP #KnowYourNeighbour initiative and fully funded by the Office of RTCYPP. The current academic term there were 3 priests, 3 imams and 4 laypersons enrolled.

Joint initiatives of the RTCYPP Language Classes during 2018-2019 Term:

The participants helped the Office of RTCYPP to organise four joint excursions to different places of worship, including historic monuments like St John’s Cathedral at the Archbishopric of the Greek Orthodox Church of Cyprus, Bayrakdar Mosque and the St Maroun Chapel and the newly refurbished Betmoroun socio-cultural and pastoral Centre of the Maronite Church of Cyprus. During Ramadan, the RTCYPP Language Course team were welcomed to Hala Sultan Tekke for an Iftar.  Together with the Home for Cooperation, two soap-making workshops in three languages were offered to participants from across the island. Participants also enjoyed a visit to the Centre of Visual Arts and Research (CVAR) – the only bi-communal museum in Cyprus – where they were given a personal tour by its founder and Director and appreciated the Swedish Embassy’s photo exhibition “Swedish Dads”. 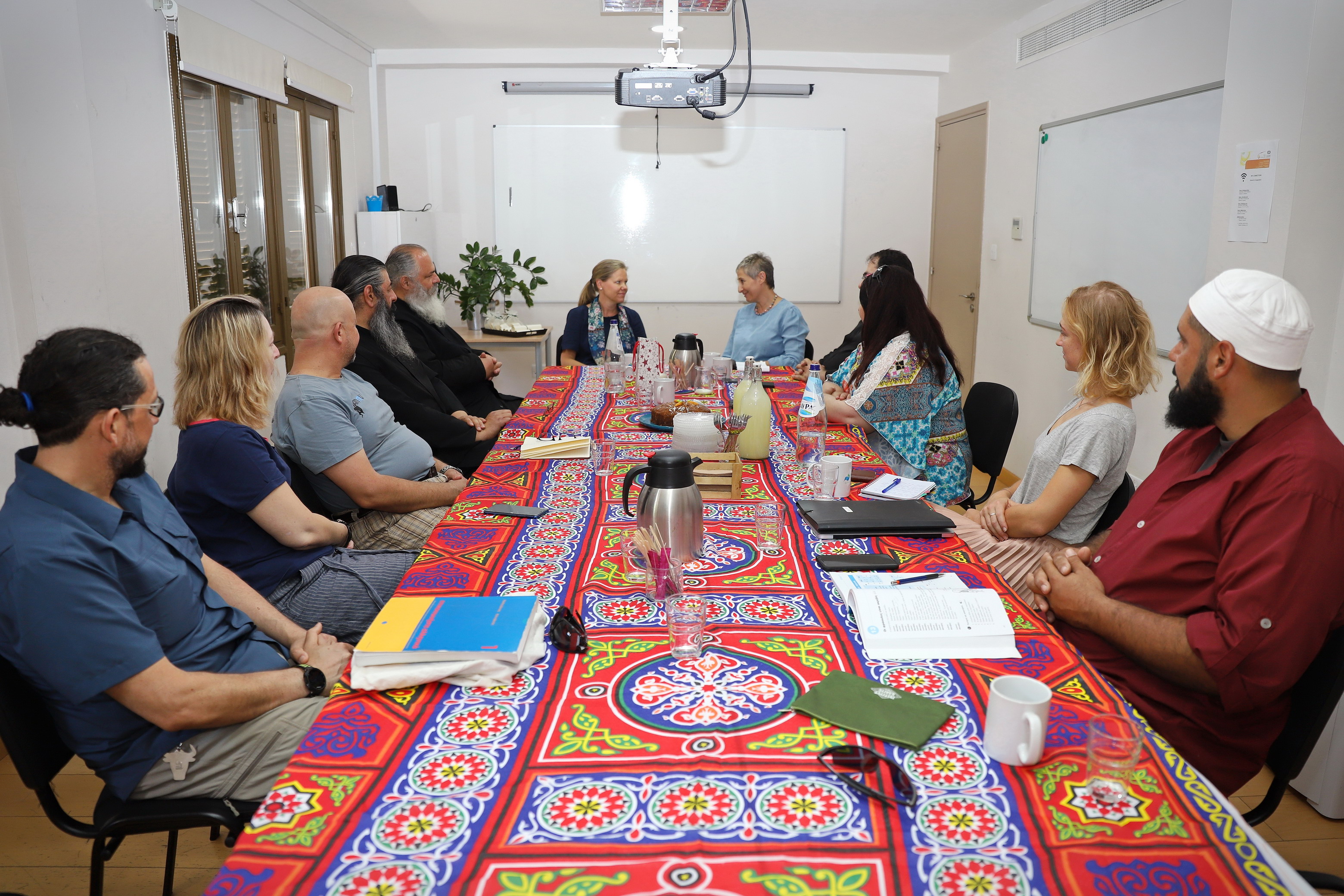 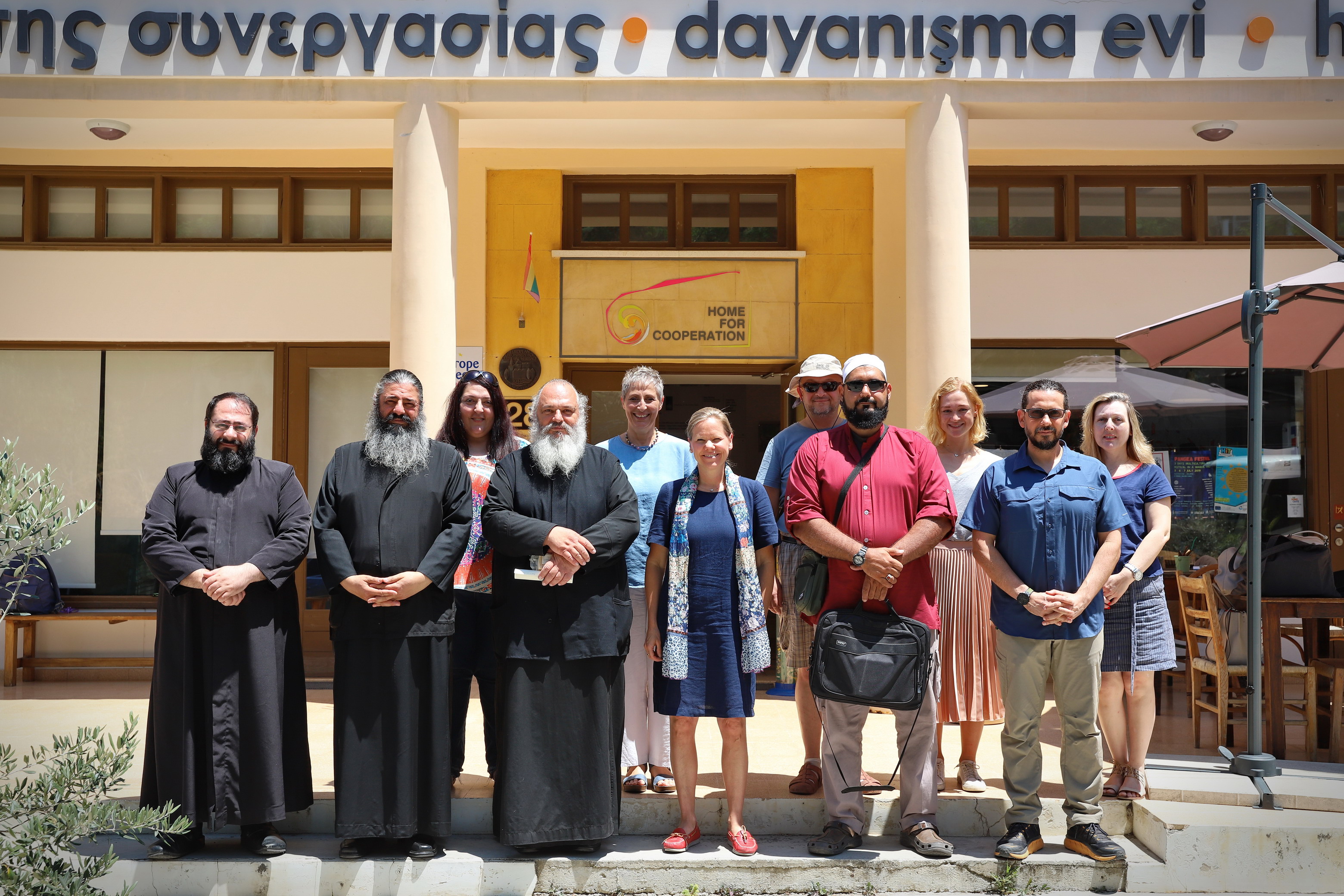 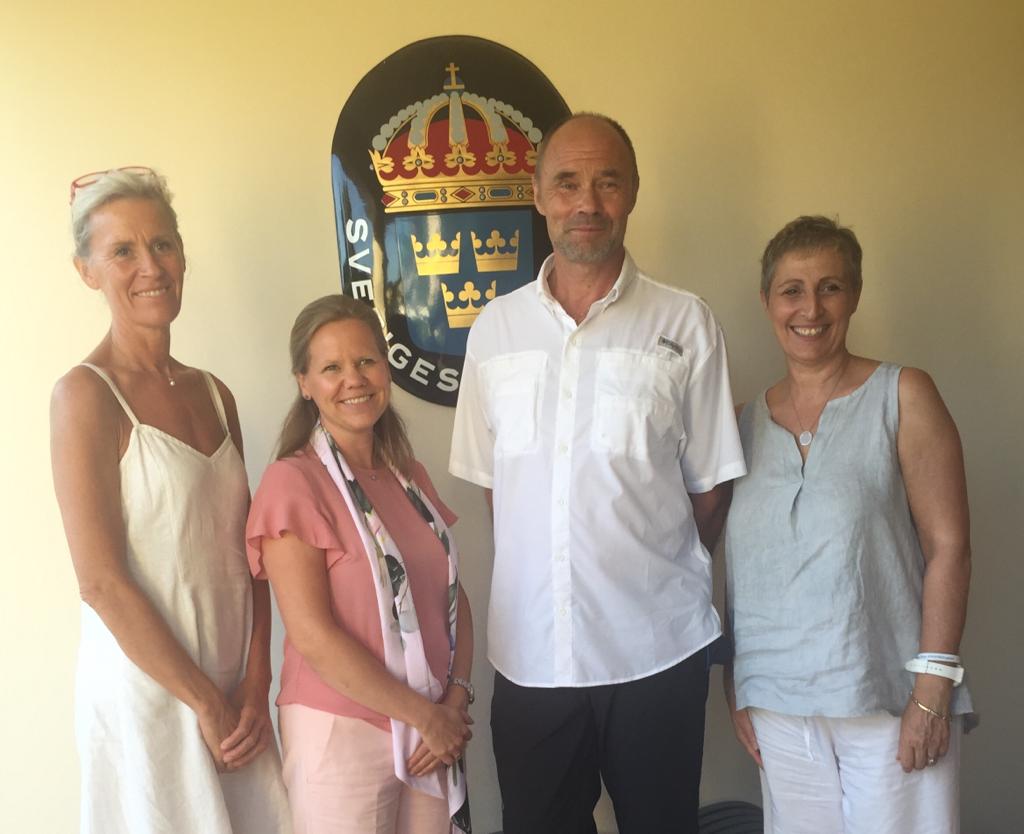 To mark World Refugee Day, Office of RTCYPP highlights the united voice of the Religious Leaders of Cyprus, issued in the video statement in solidarity with refugees around the world who are forced to abandon their homes, their land and their environment.

The Religious Leaders of Cyprus call on the faith communities in Cyprus to stand with refugees by taking big and small steps in solidarity with them. They reiterate their call on decision-makers to address the underlying causes of refugees and uphold the human right to asylum.

“Help solve the problems of refugees and for the Mediterranean Sea to cease being a graveyard for innocent people.”
(Archbishop Chrysostomos II of the Greek Orthodox Church of Cyprus).

Faith communities are called on to provide safe spaces and support;

“Embracing refugees and providing them with maximum care is not only humanitarian requirements, but is also a religious obligation”
(Mufti of Cyprus Dr. Talip Atalay).

The Religious Leaders of Cyprus emphasize the responsibility to love and support refugees;

“Refugees are our brothers and sisters in search of a better life”
(Father Jerzy Kraj of the Latin Catholic Church of Cyprus).

“Religions teach us to love each other, and we should extend this love equally to our fellow human beings”
(Archbishop Khoren Doghramajian of the Armenian Church of Cyprus).

“Let us welcome them, listen to them, protect and accompany them and learn from their potential”
(Archbishop Youssef Soueif of the Maronite Church of Cyprus).

Every year on June 20th, World Refugee Day, is marked worldwide to reaffirm the commitment of all actors involved to support refugees and raise awareness of this global responsibility. UNHCR and partners on this special day pay tribute to the strength and courage of refugees, people who have had to flee their homelands because of conflict or persecution.  On World Refugee Day, we want to show that families forced to flee are people like you and me.

In a world where violence forces thousands of people to flee for their lives every day, let’s all Take a Step #WithRefugees!

On the occasion of the Feast of St. Barnabas, the founding Apostle and patron saint of the Church of Cyprus, evening prayer service was held on June 10, over the Tomb of the Apostle in open air. The evening vespers were led by the Abbot of Apostolos Barnabas Monastery and Cathedral, the Very Reverend Father Ioannis Ioannou accompanied by the representative Bishop from the Patriarchate of Alexandria and All Africa with around 200 faithful and the Director of the Office of RTCYPP under the Auspices of the Embassy of Sweden.

“We are grateful for the grace of God to allow us to be here together to worship Him, pray together with our brother from the Patriarchate of Alexandria and venerate our Apostle.” said Father Ioannis. “We welcome our brother from Hala Sultan and thank him for this presence and support. We pray St Barnabas will end the suffering of our island and unite us once again so that we can live together in dignity, with peace and love -Greek Cypriots, Turkish Cypriots, Armenians, Maronites and Latins alike.“

Holy liturgy is scheduled to take place at the Main Cathedral in the morning of June 11.

Hundreds of pilgrims visit the Monastery of Apostolos Barnabas each year for the Feast of the Apostle, which is celebrated with Evening Vespers on June 10th and a Holy Liturgy on June 11 both at the Main Cathedral. Since 2014, there is monthly worship at the chapel over the Tomb of St Barnabas and 6 times a year at the Main Cathedral, otherwise used as an icon museum without the permission and consent of the Church of Cyprus. 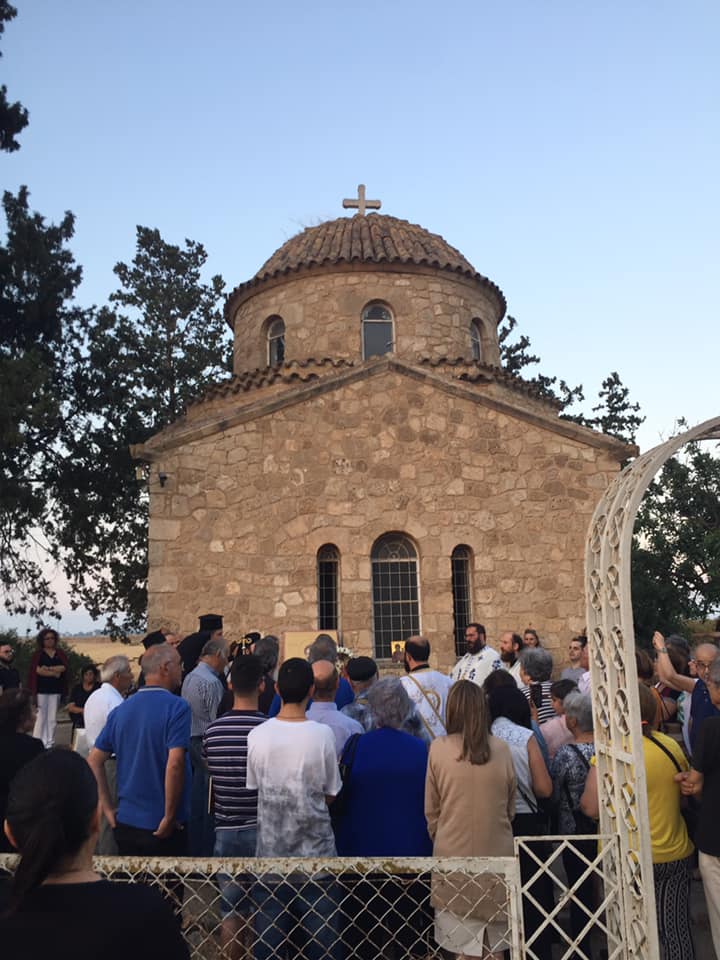 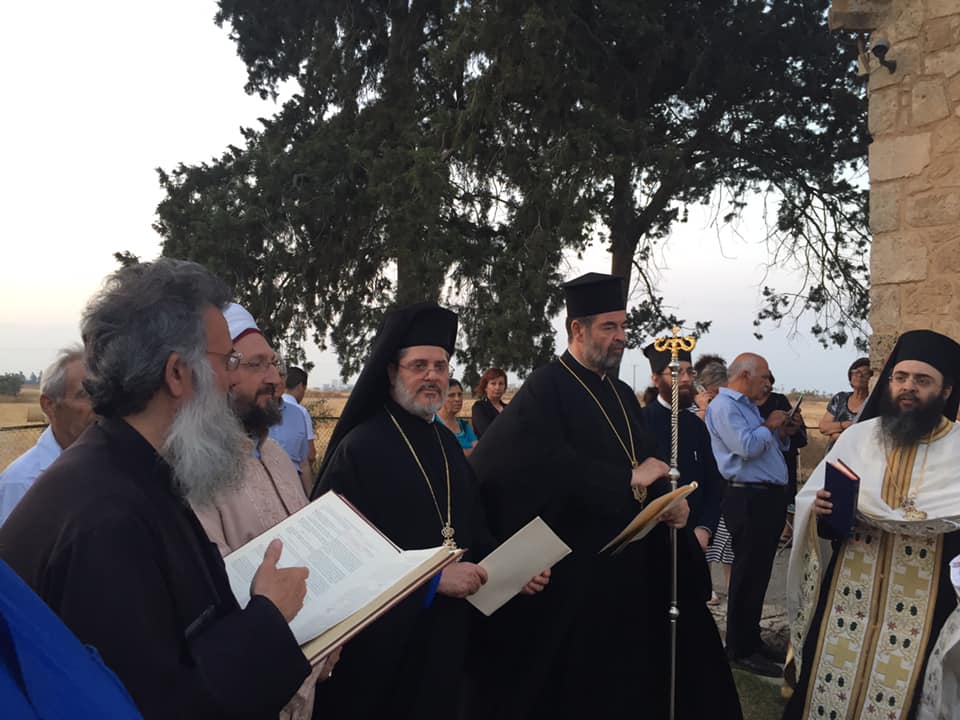 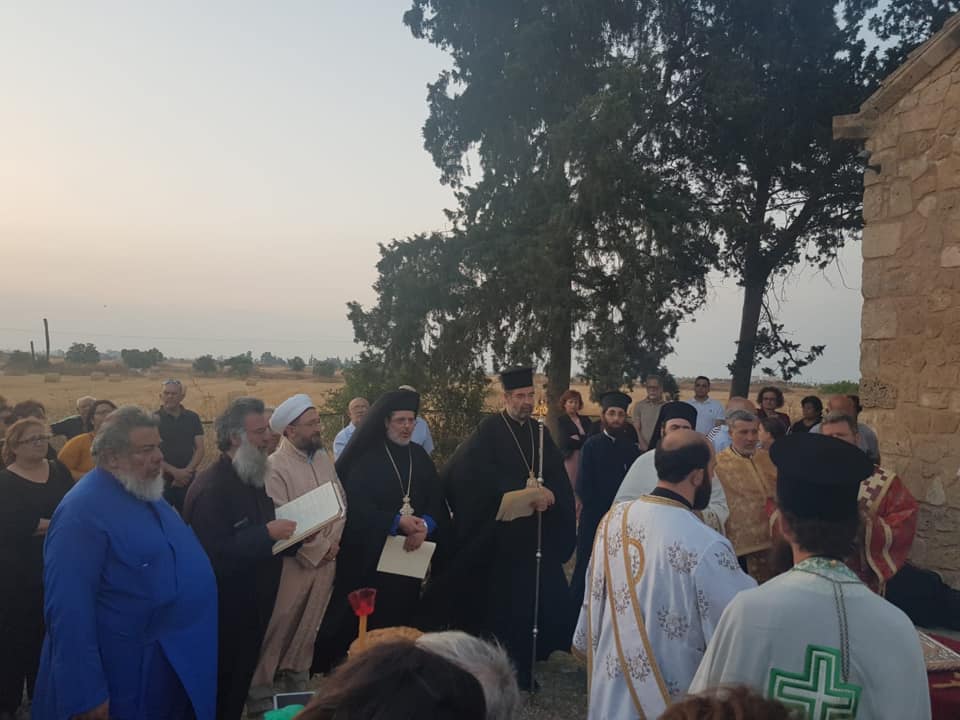 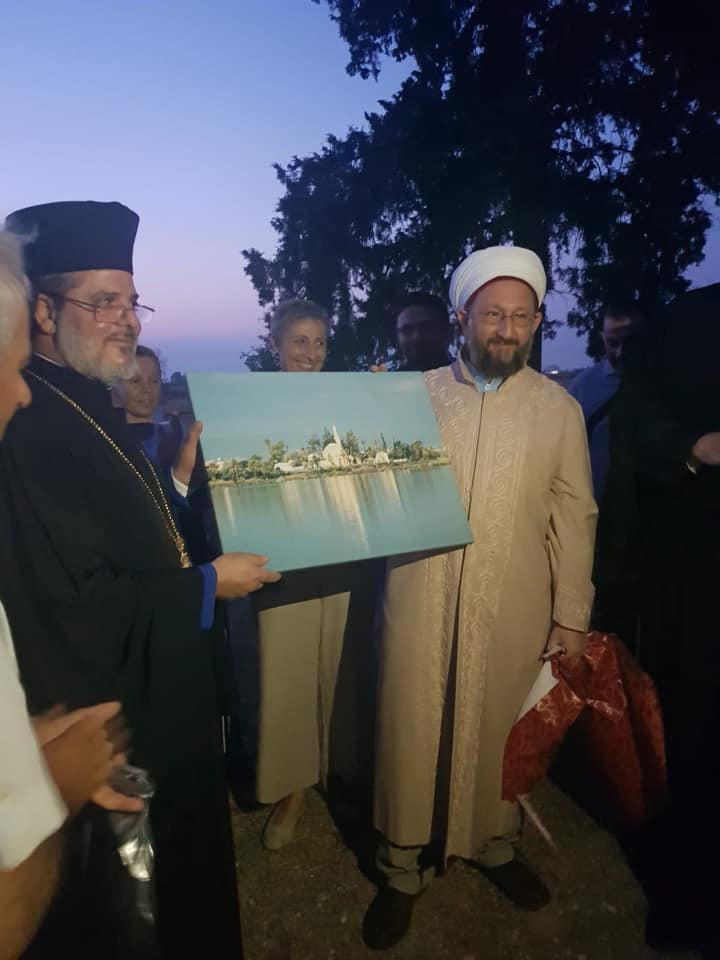 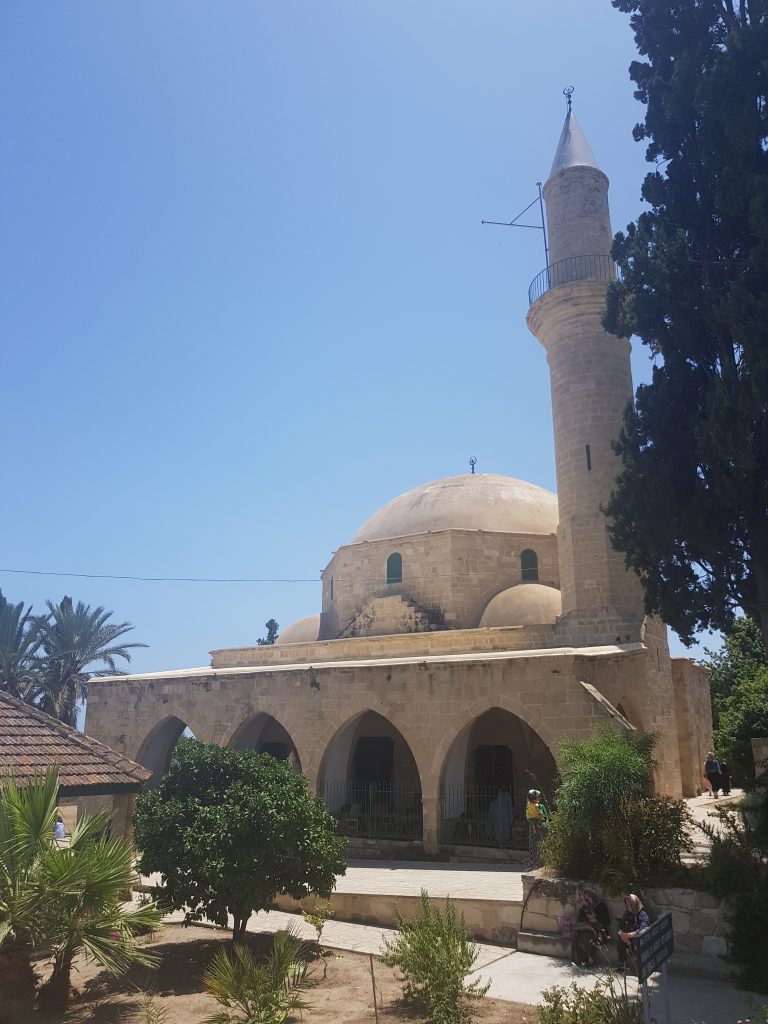 On the occasion of the feast of Eid al-Fitr, the Christian Religious Leaders Of Cyprus – H.B Archbishop Chrysostomos II of the Greek Orthodox Church, H.E. Archbishop Khoren of the Armenian Orthodox Church, Archbishop Soueif Of the Maronite Church and the Latin Patriarchal Vicar Rev. Father Kraj – issued a joint message address to the Mufti of Cyprus, Dr Talip Atalay and all Muslim faithful of and in Cyprus, wishing them a blessed Eid - “Ramazan Bayram”.

“We pray that Ramadan was spiritually uplifting for all. We especially pray for the most vulnerable among us. May God’s bright light shed on the path of enlightenment, grant forgiveness, blessings of peace, and grace upon all faithful. Eid Mubarak!”

You can find further details on RTCYPP website and social media channels. (http://www.religioustrack.com/2019/06/07/joint-greeting-for-eid-al-fitr-4-6-19/)

On the occasion of Eid al-Fitr, we, the Christian Religious Leaders of Cyprus wish our brother, the Mufti of Cyprus, the clerical order of Imams and all Muslim faithful of and in Cyprus a blessed Ramazan Bayram/Eid al-Fitr!

We pray that Ramadan was spiritually uplifting for all. We especially pray for the most vulnerable among us. May God’s bright light shed on the path of enlightenment, grant forgiveness, blessings of peace, and grace upon all faithful.

H.B. Chrysostomos II
Archbishop of Nova Justiniana and All Cyprus

H.E. Yousef Soueif
Archbishop of the Maronite Church of Cyprus 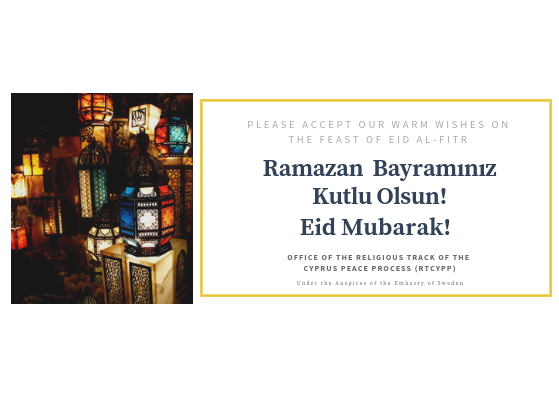