H.E. Ann Linde, Minister for Foreign Affairs of Sweden, marked the 10 Year Anniversary of the RTCYPP by meeting with the Religious Leaders of Cyprus. The event was hosted by the Ambassador of Sweden, H.E. Anders Hagelberg, and moderated by Sweden’s Special Envoy on Religion in Conflict and Peacebuilding.

Minister A. Linde congratulated the religious leaders of Cyprus for being the first in Cyprus to work together uninterrupted for human rights and peace, despite politics and real challenges.

“By coming together you have shown a different path. You meet regularly despite the political climate, you coordinate your responses. And you courageously stand up for the rights and each other’s needs. You have shown that religion can unite instead of divide.

On this occasion, Minister Linde asked Ambassador Hagelberg to hand over, in the name of His Majesty the King, the Royal Order of the Polar Star awarded to the Director of the Office of the Religious Track, Ms. Salpy Eskidjian Weiderud. Salpy is the one of the few Cypriots to receive this rare Swedish order, awarded to foreigners who have done extraordinary efforts for Sweden.

The motivation stated that, “Salpy has given Sweden visibility in the Cyprus peace process, a role as political actor and promoted Sweden and Swedish culture. She has put Sweden in the limelight, while standing discreetly behind. Her disinterested emphasis of Sweden as an actor for peace in Cyprus has substantially widened and deepened our bilateral relation on several levels, including on the highest political one.”

The Religious Leaders welcomed the meeting, thanked the Minister for the support of the Swedish government, and congratulated the RTCYPP Director for the award. In turn, they expressed their commitment to continue and build on the genuine cooperation they have had with the Embassy of Sweden and develop stronger and new ties with the Minister herself, as well as with her Ministry.

“The last ten years we have shown our strong will and commitment to work together to restore religious freedom in Cyprus. Religion is not the problem or the cause of the Cyprus conflict. Religious freedom is one of its victims”, said Archbishop Chrysostomos II of the Church of Cyprus. “It is the responsibility of the political leaders to solve this problem”.

“Despite the challenges and negative reactions, we reiterate whenever and wherever we can that places of worship have to be respected as such and be used for the purpose they were intended to”, said Mufti of Cyprus.

“Without the right to access, to freely care for, administer and pray at our places of worship the wounds of separation will only get worse.  We are committed not to allow that to happen”, said Archbishop Khoren of the Armenian Orthodox Church of Cyprus.

“Healing the memories of the past, purifying them and to work on reconciliation between divided communities is our mission and nothing will stop us from doing what is most natural for us”, said Archbishop Soueif of the Maronite Church of Cyprus.

“We know the power and impact of forgiveness on healing and transformation”, said the Latin Patriarchal Vicar Reverend Jerzy Kraj. “Peacemakers become a channel of God's grace to others. When we pray for those who have offended us, it frees us to love as God loves. God's grace has power not only to change us, but also those who have hurt us.”

“I am honored to serve the cause of human rights and peace with the country I adopted because of your values I deeply cherish”, said Salpy Eskidjian Weiderud on receiving the award. “I thank you for trusting me and for believing in me to help Cyprus in a way I would never be able to if it were not for Sweden and the Religious Leaders of Cyprus.”

The meeting took place at the Home for Cooperation in the UN controlled Buffer Zone where the Religious Leaders present could be connected to the Ministry for Foreign Affairs and the Muftiate of Cyprus electronically. 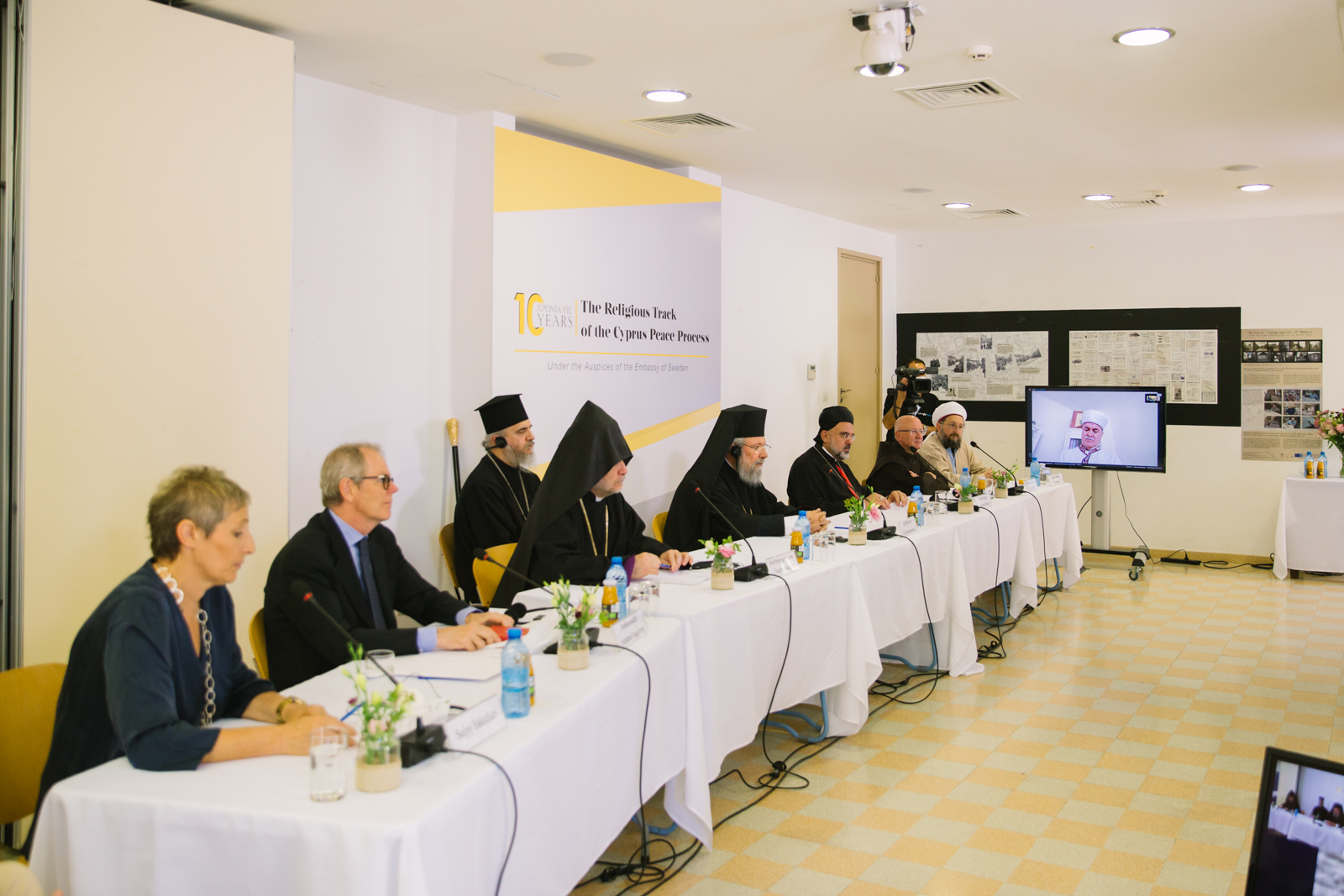 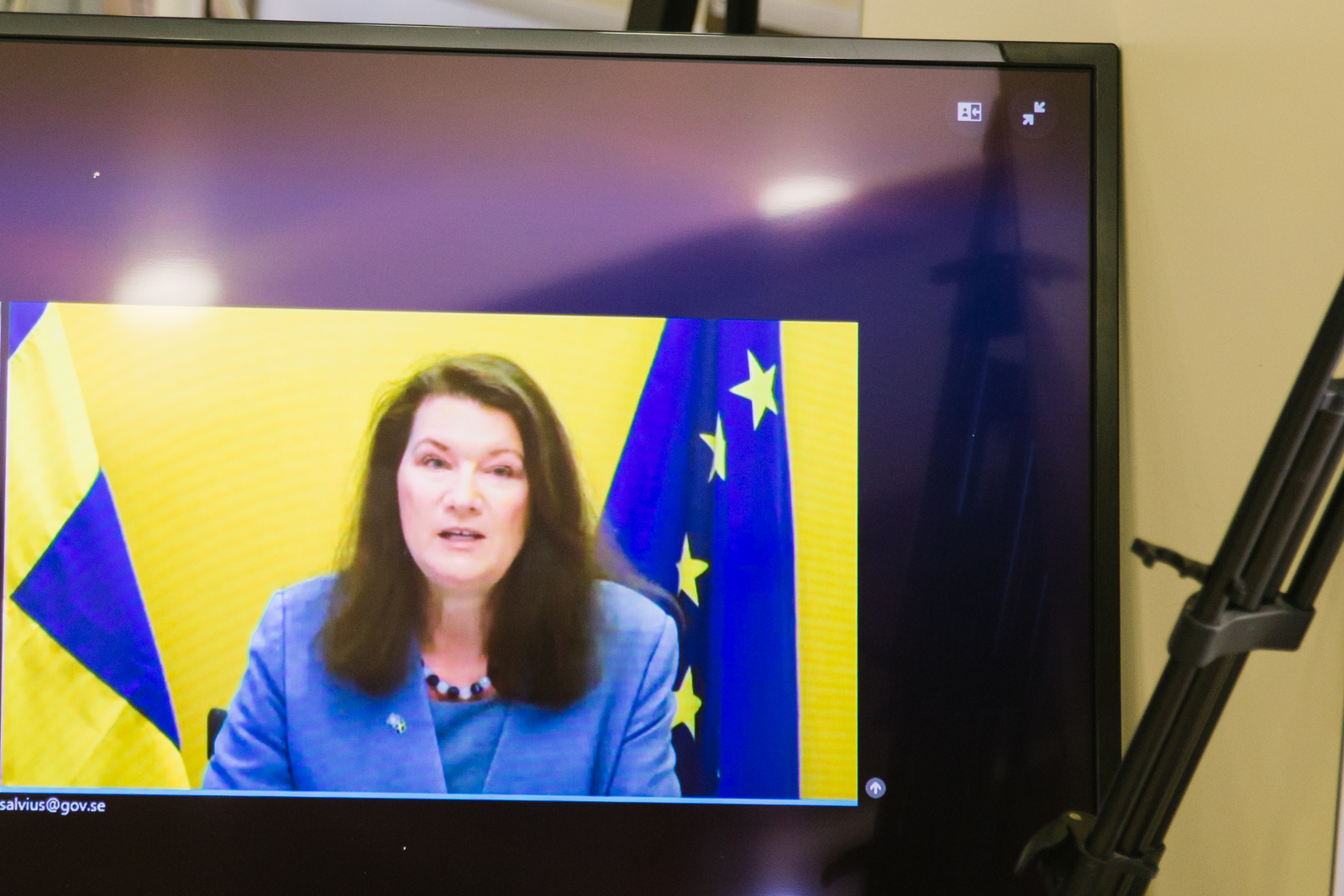 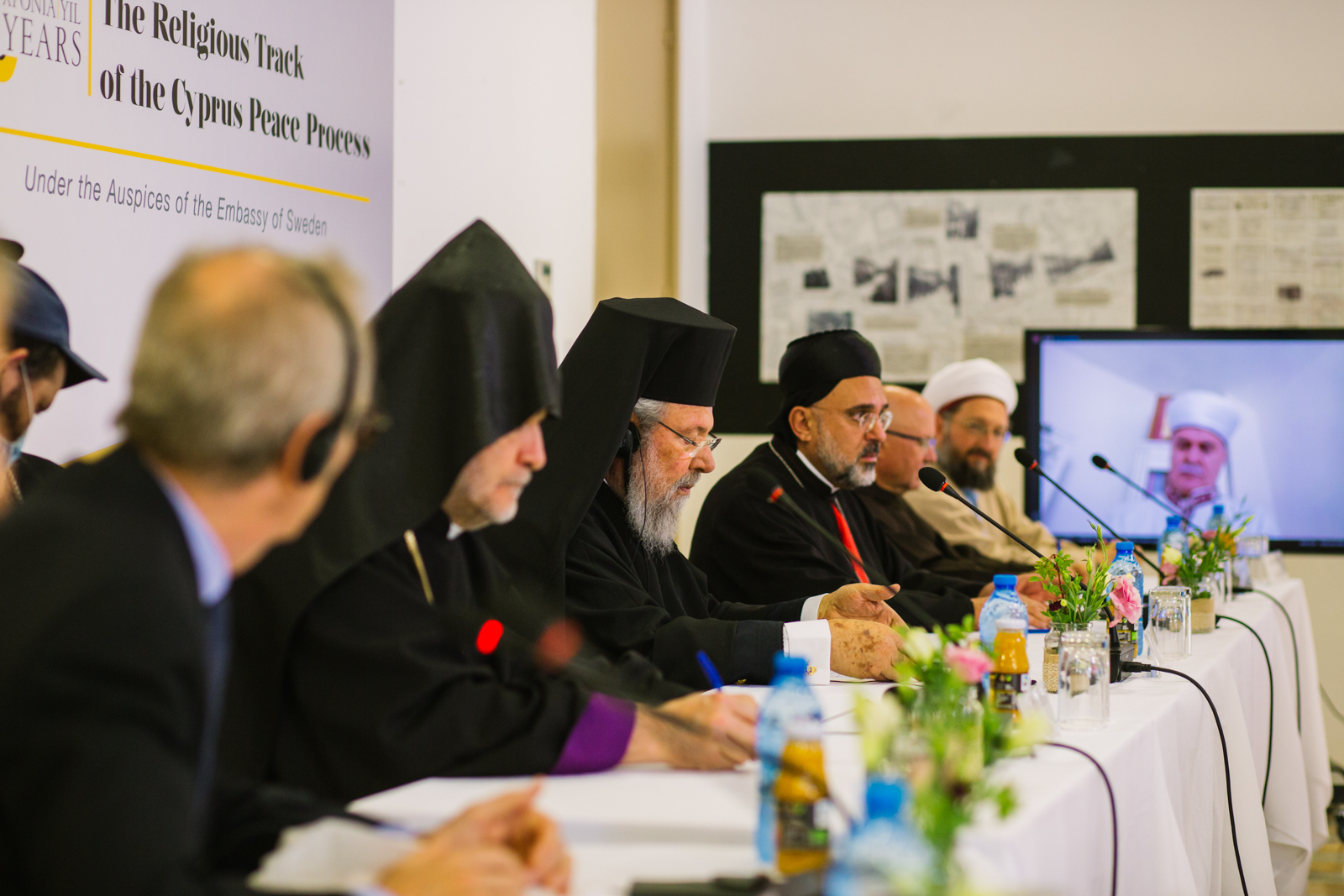 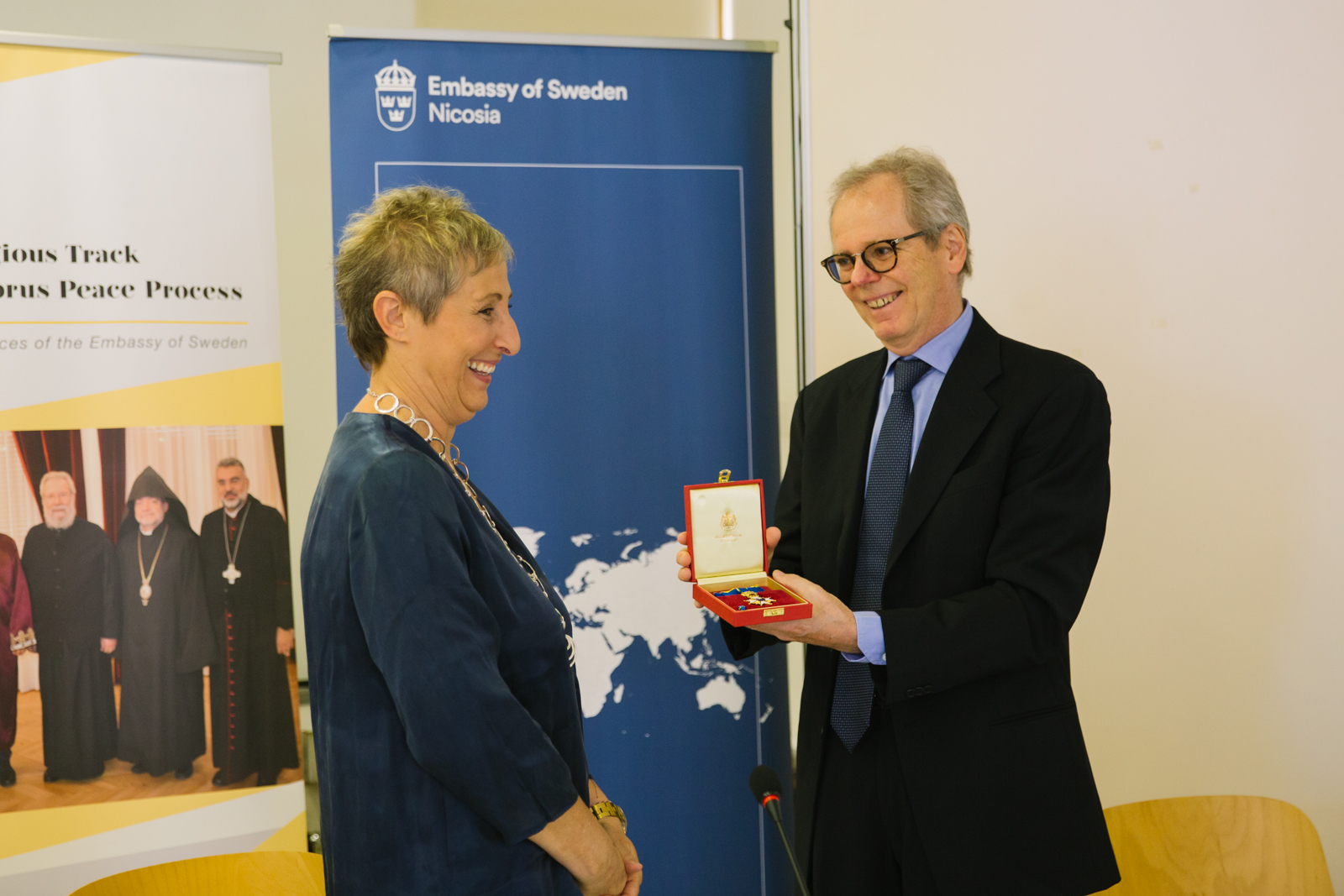 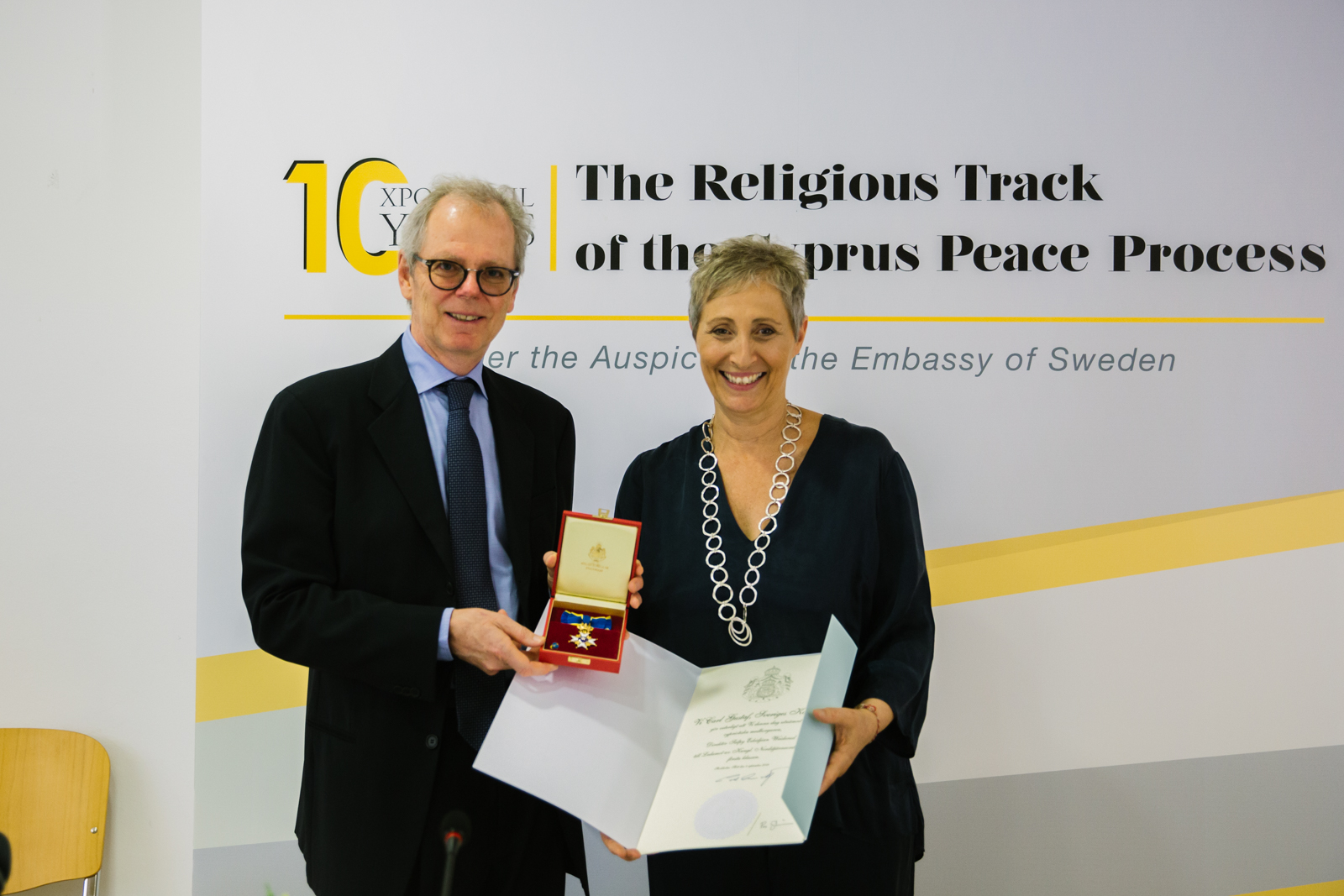 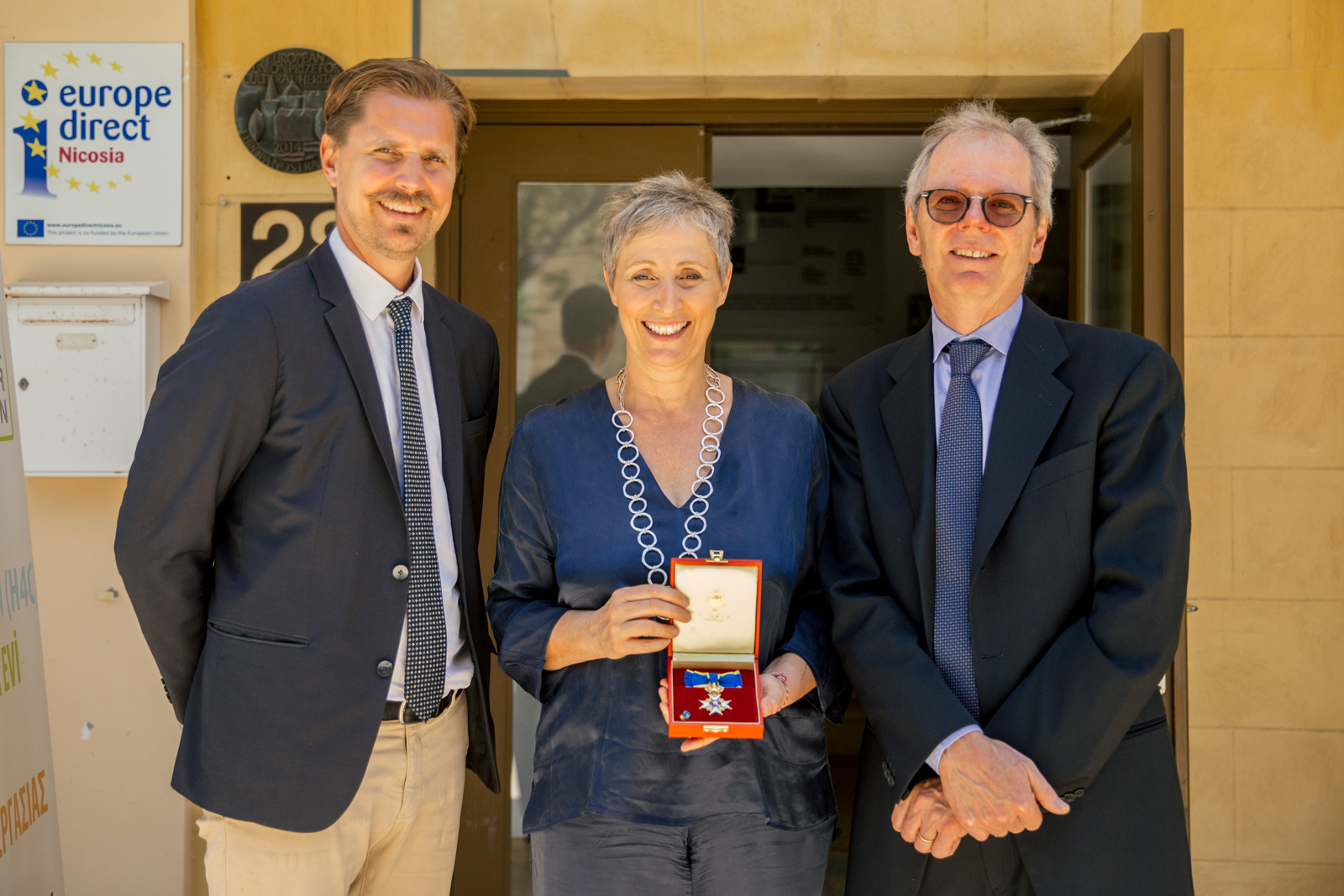