Office of RTCYPP appreciates the visit of Ambassador Garber of USA to Koprulu Mosque in Limassol and her support to uphold and advance religious freedom.
Imam Shakir Alemdar received the Ambassador & her delegation and gave a tour of the mosque accompanied by the Turkish Cypriot caretaker of the Mosque. Imam Shakir highlighted the importance of religious freedom in Cyprus and the joint efforts of the religious leaders of Cyprus in this regard.
In a public statement the USEmbassy in Cyprus stated that; « Promoting universal respect for freedom of religion or belief is a core objective of U.S. foreign policy ».
Following efforts of the Office or RTCYPP and full support of the Archbishop Chrysostomos II & Mufti Atalay of Cyprus, the Koprulu Mosque in Limassol, has been free & open for worship, administered by its rightful owners & community of faith. 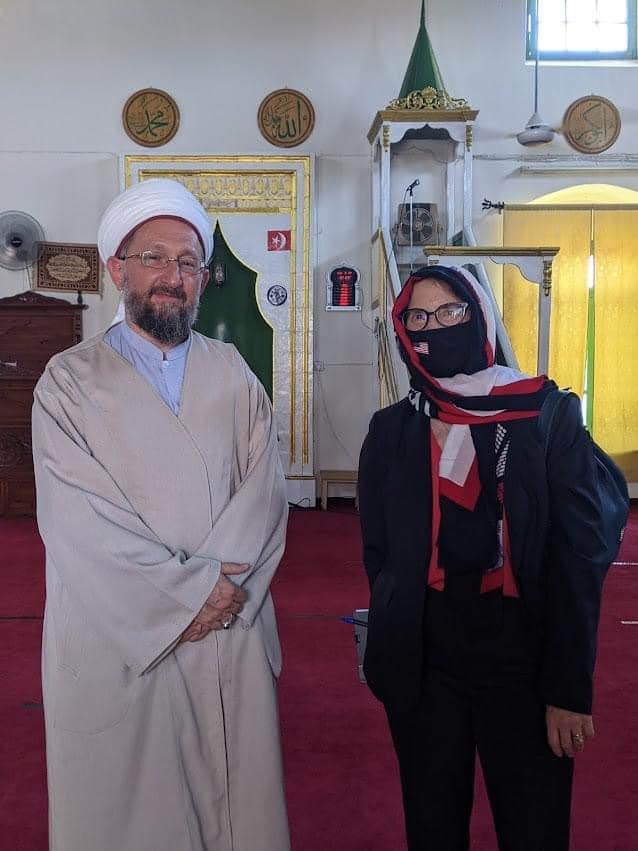 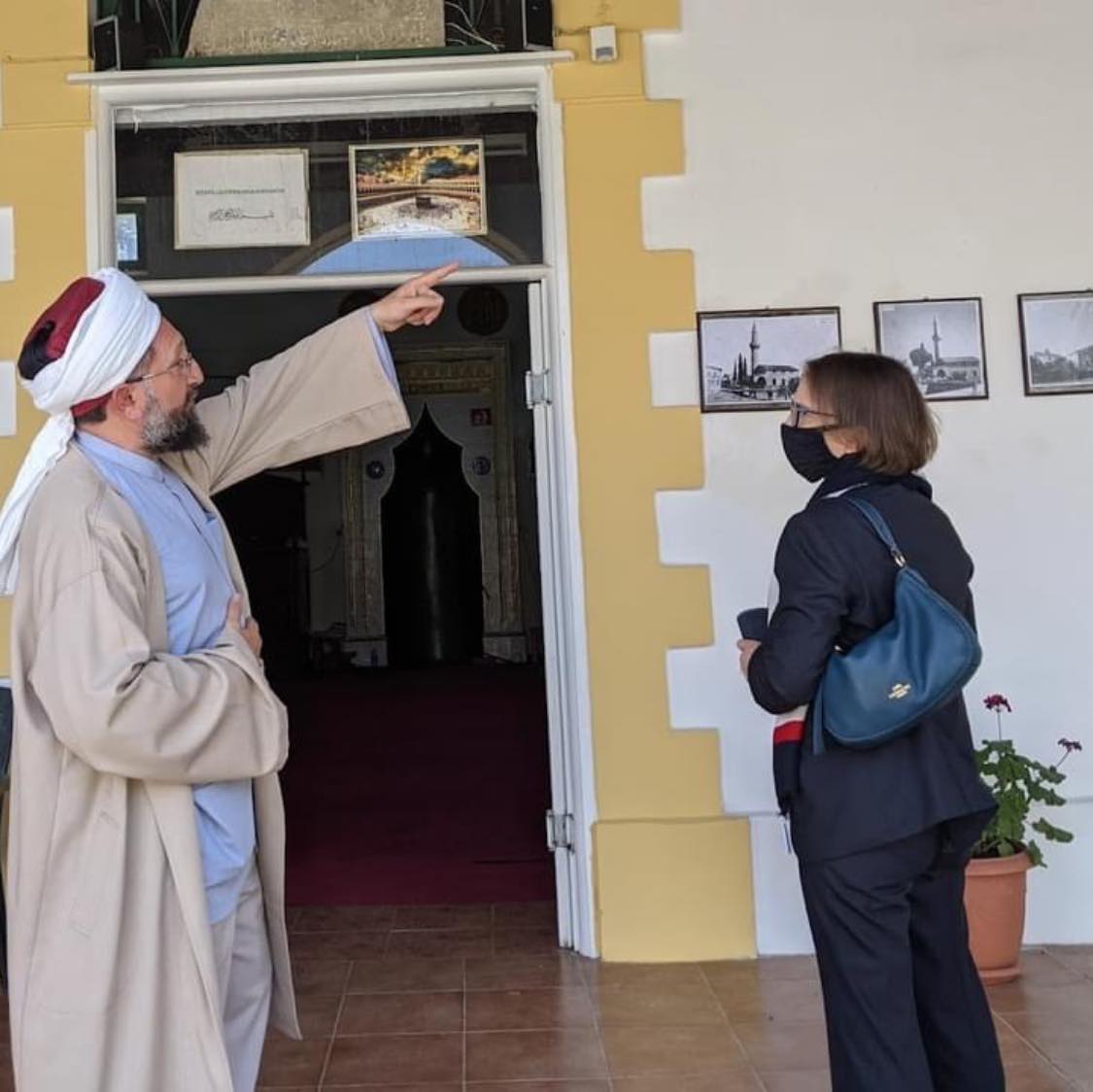 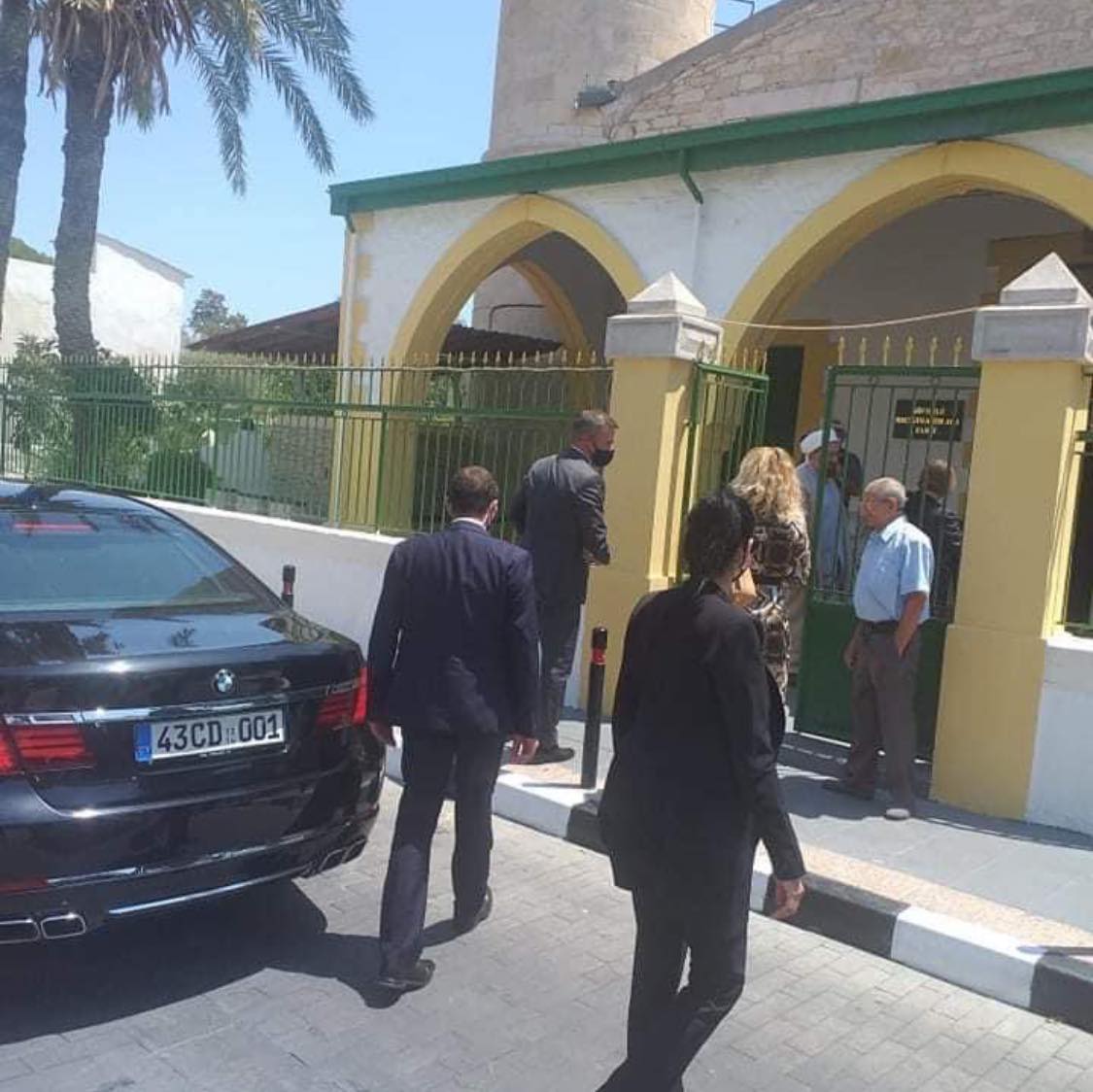 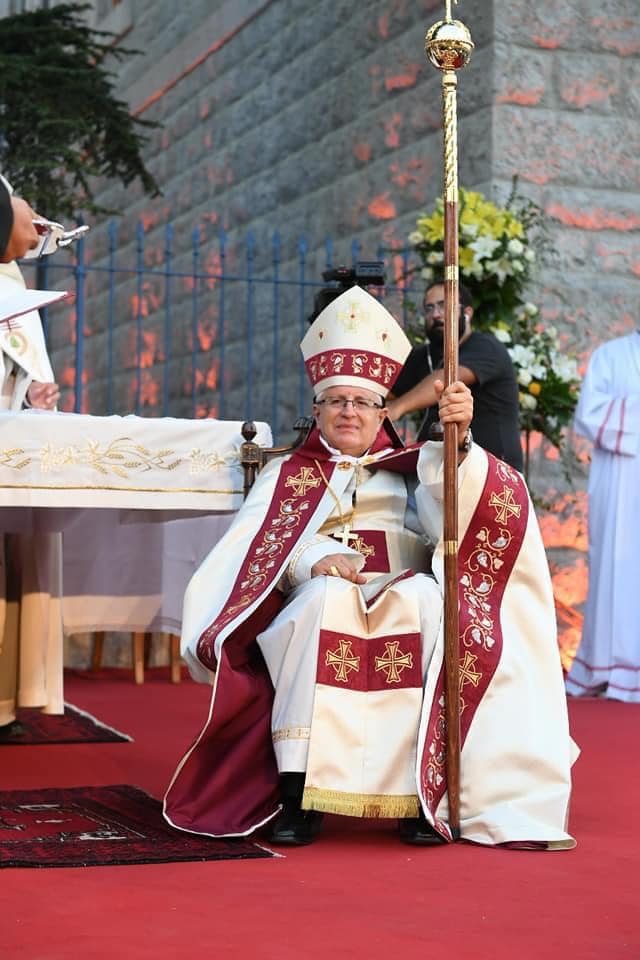 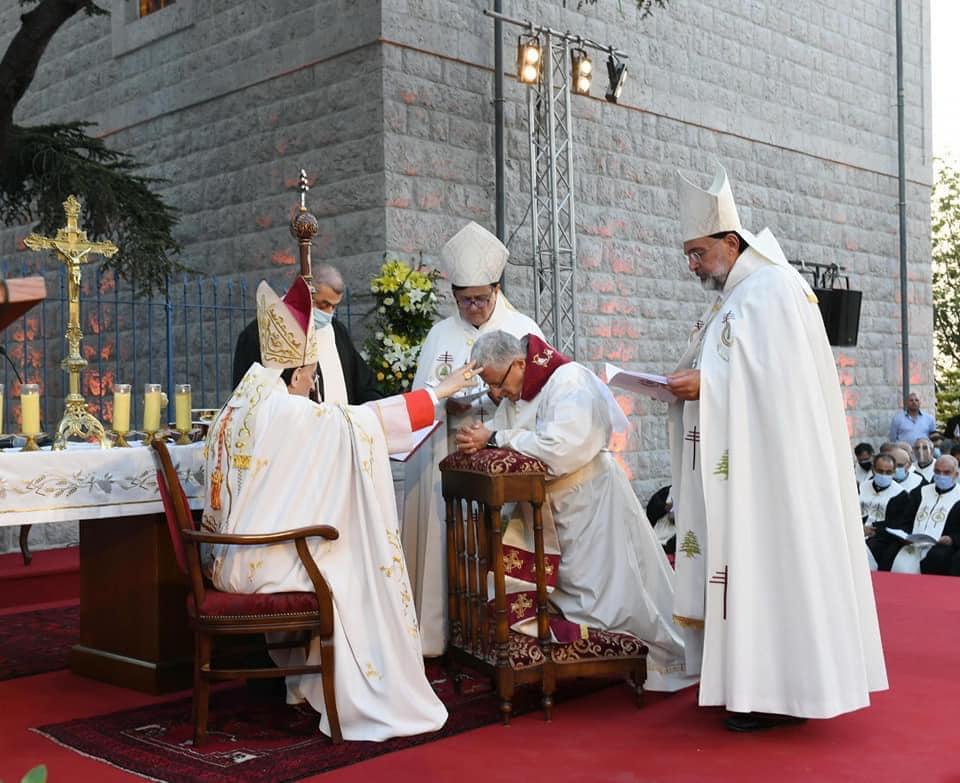 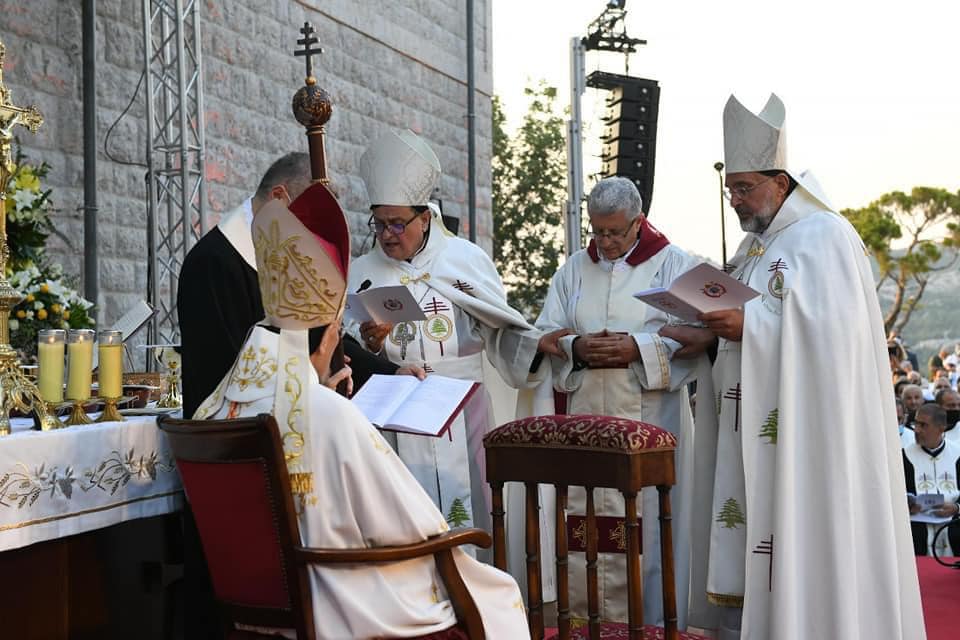 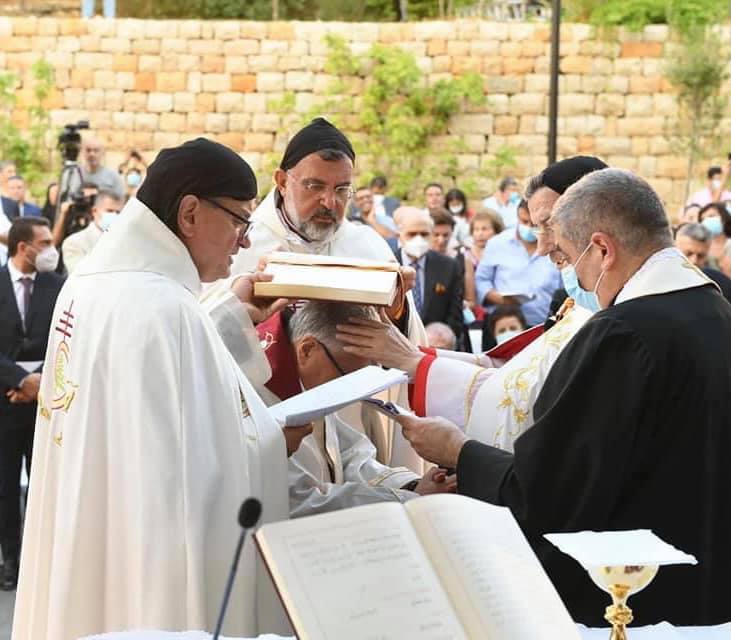 Statement from the Office of RTCYPP

26 July 2021
Religious Leaders of Cyprus, extend sincere thanks, appreciation and their respects to Prof. Dr Talip Atalay as he leaves office as Mufti of Cyprus and wish him all the very best in his new endeavors. Described by all who worked with him as a person with integrity & dignity, honest, genuine, courageous, polite, patient and kind, he will be missed by all who knew him.
Professor Dr Atalay was the first Mufti in the history of Cyprus who was in dialogue with all religious leaders of Cyprus and faith communities in Cyprus. Together with Archbishop Chrysostomos II, head of the autocephalous Greek Orthodox Church of Cyprus, he worked tirelessly for ten years, to create understanding, build bridges of trust among the faith communities of the island and advance religious freedom.
Together they invited the Armenian, Maronite and Latin Catholic Religious Leaders of Cyprus to join them on a journey of transformation, where the language of understanding, solidarity, human rights and peace found centre stage.
Inspired by their religious teachings and driven by their strong commitment to bring about positive change, the five religious’ leaders of Cyprus took courageous and unprecedented steps together and were able to bring about concrete and significant steps for religious freedom, human rights, peace and reconciliation.
Since 2011, their united voice and witness were heard, recognized & appreciated by different international institutions, among others, the UN Security Council, the UN Secretary General and his Good Offices in Cyprus, UNFICYP, the UN Office of the High Commissioner for Human Rights, Special Rapporteurs for Freedom of Religion, the Office of Democratic Institutions and Human Rights of the OSCE, the European Commission, the US Department of State and the diplomatic community in Cyprus. Together they reached out and established relationships with political leaders, UNFICYP, Committee on Missing Persons, UNHCR – Cyprus, local political parties, municipalities, women’s groups, academics and countless non-governmental organizations.
Throughout the process, Dr Atalay remained a man of principle and sincere values, loyal to his own faith and beliefs. Despite the critique, misunderstandings, even attacks he continued to seek truth, teach love and uphold justice.
The Office of the Religious Track of the Peace Process under the Auspices of the Embassy of Sweden and all involved join the Religious Leaders of Cyprus to sincerely thank Dr Atalay for his trust, cooperation & leadership and extend best wishes for the future.
Dr Atalay served as Mufti of Cyprus from December 2010 until 17 July 2021 when his service was terminated. 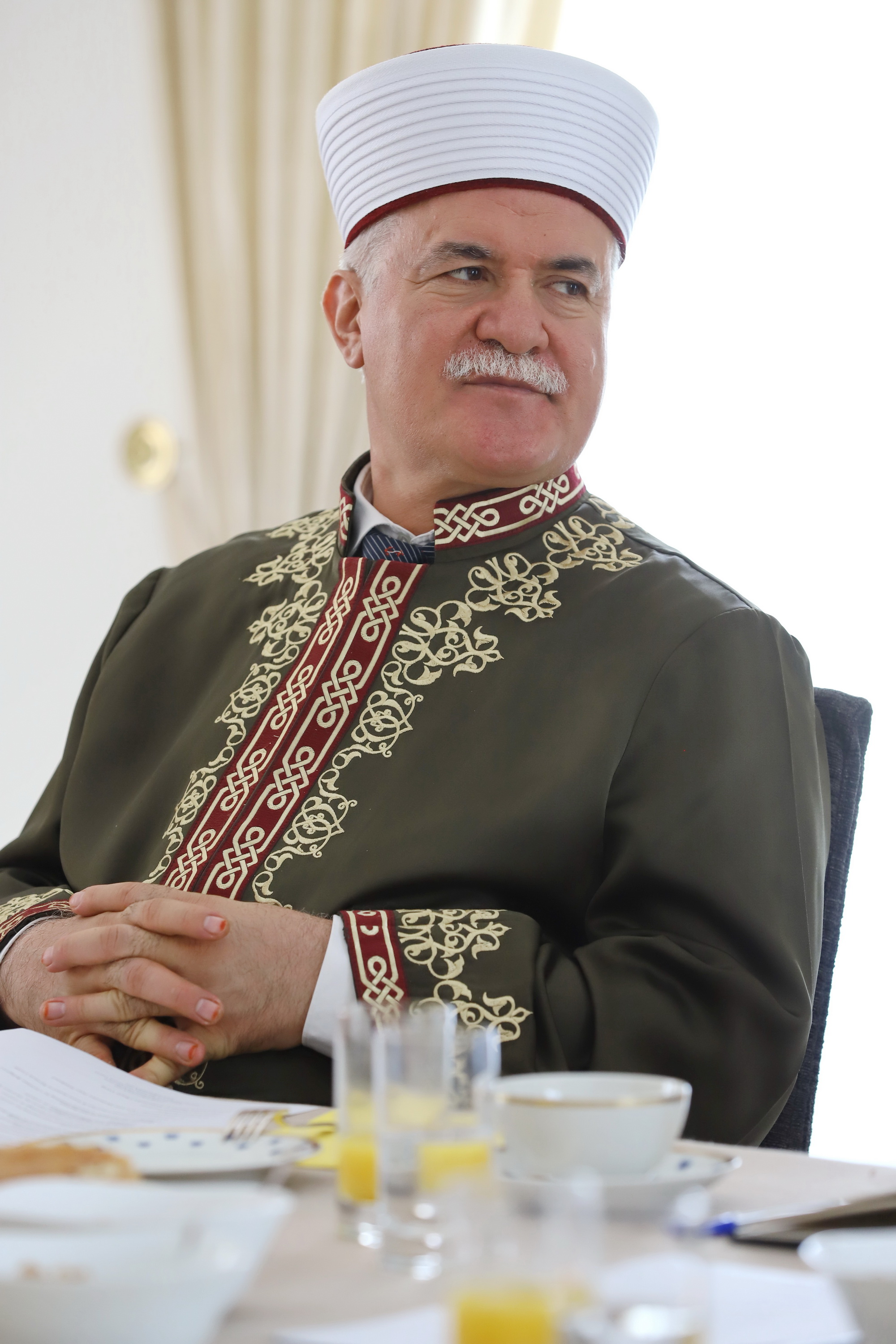 On the occasion of Eid Al Adha, or Kurban Bayram the Religious Leaders of Cyprus would like to wish everyone celebrating a blessed and peaceful feast. Eid Mubarak! 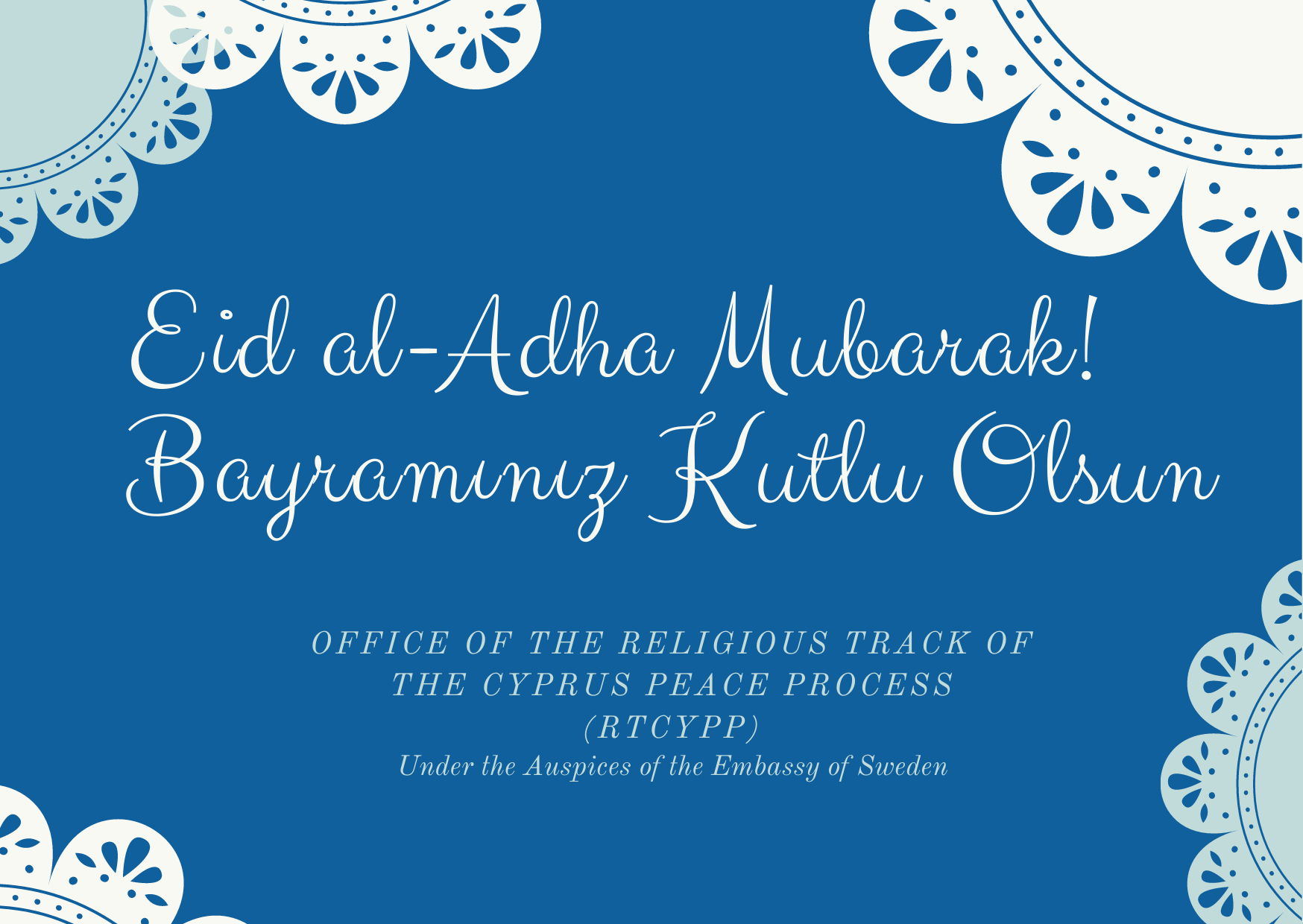 UN Secretary-General 's July 2021 report on his mission of good offices in Cyprus, once again highlighted how the Religious Leaders of Cyprus sustained their commitment to peacebuilding and reconciliation within the framework of the Religious Track of the Cyprus Peace Process (RTCYPP).
The Secretary General highlighted the joint public statements of the Christian & Muslim religious leaders, promoting forgiveness, counteracting further polarization and standing up for religious freedom.
Secretary General Guterres pointed out the joint statements issued by the religious leaders swiftly and in a conciliatory manner, for cases of desecration and vandalism of places of worship; prevented serious and potentially harmful to intercommunal relations, backlash. Lastly, the report highlighted how religious pilgrimages, part of an unprecedented agreement reached between Archbishop Chrysostomos II and Mufti Talip Atalay in 2014 within the framework of the RTCYPP and supported by the Minister of Foreign Affairs of the Republic of Cyprus; have been an important confidence-building measure. 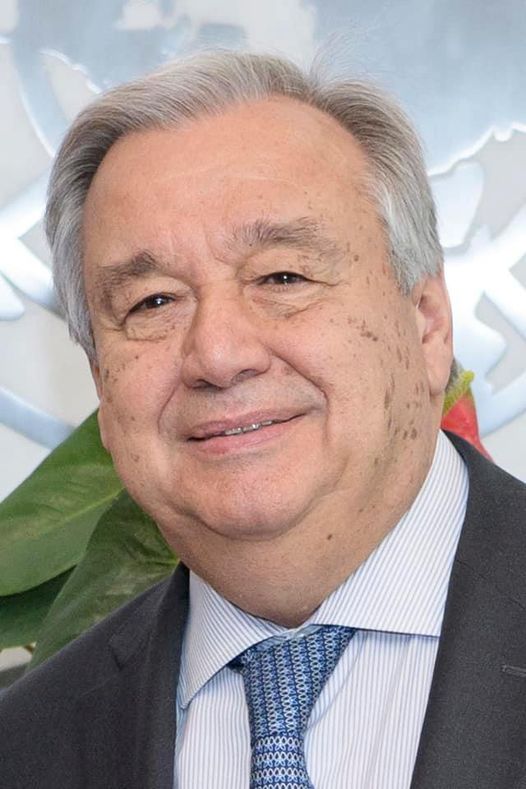 H.B Archbishop Chrysostomos II , H.E Mufti Talip Atalay , H.E Archbishop Khoren accompanied by Imam Shakir Alemdar meet in person for the first time since the COVID pandemic. The Religious Leaders of Cyprus were attending the reception hosted by H.E. Judith Garber, Ambassador of USA celebrating US Independence Day, commemorating the Declaration of Independence of the United States, on July 4, 1776.
The religious leaders of Cyprus appreciate the efforts of the US Embassy for religious freedom in Cyprus and the excellent collaboration with the Office of RTCYPP in this regard. 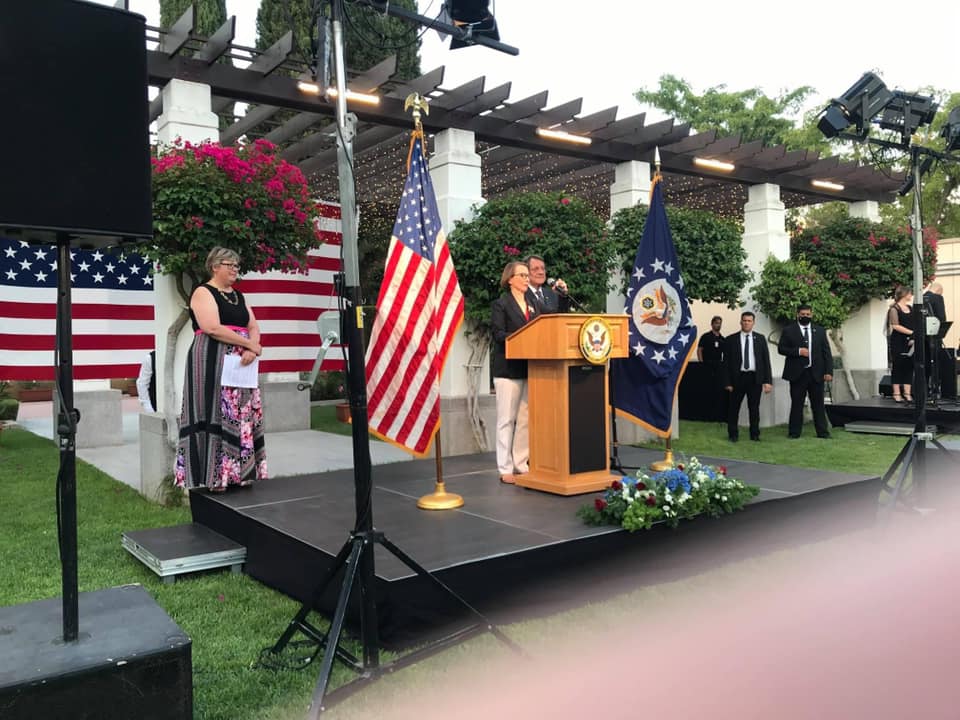 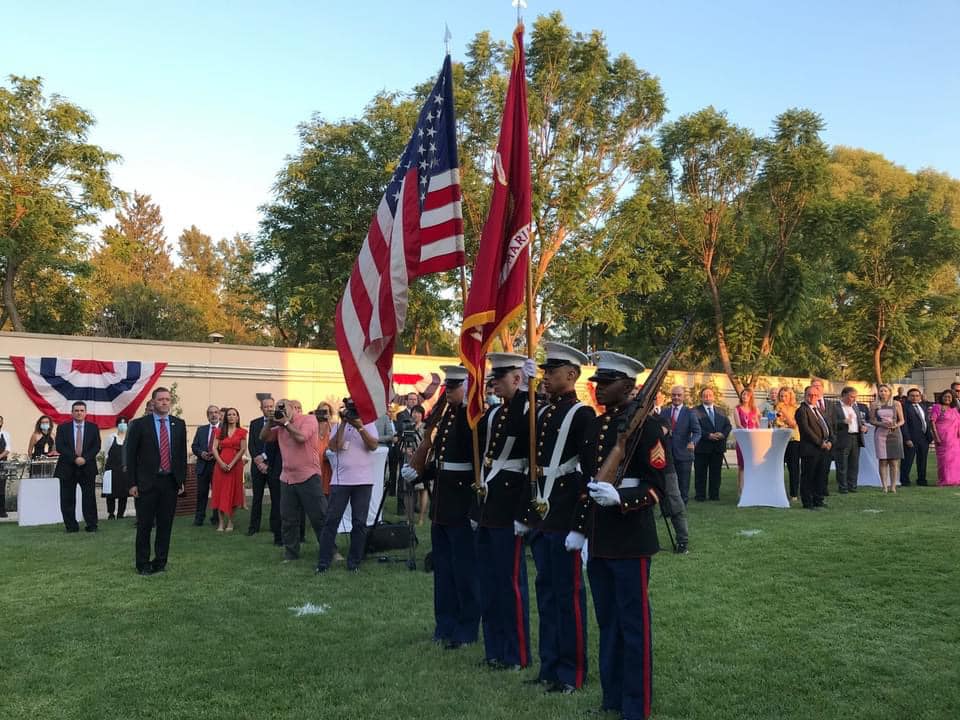 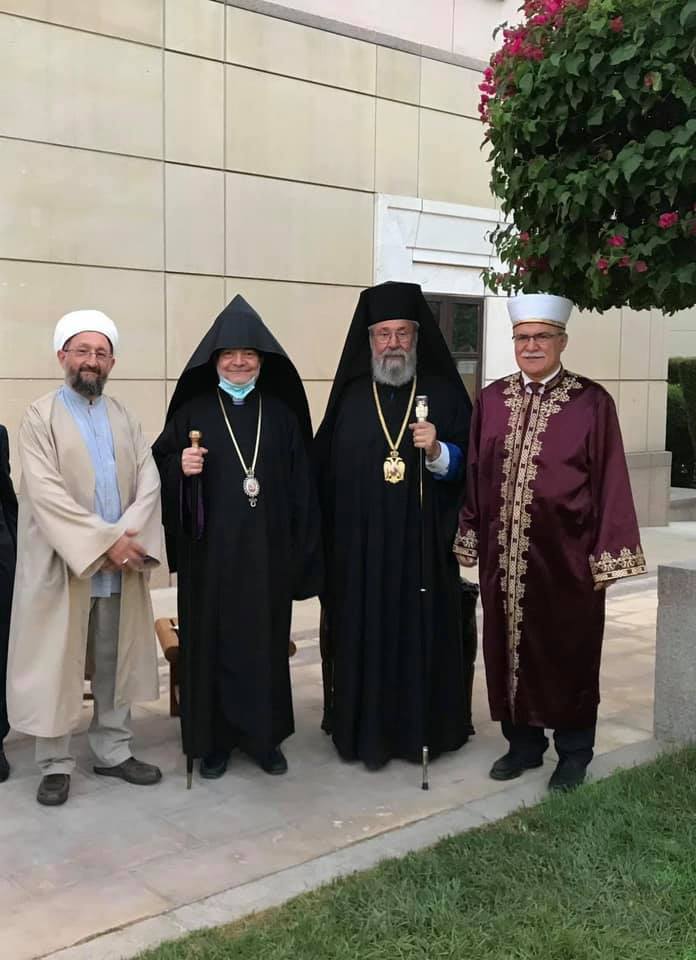 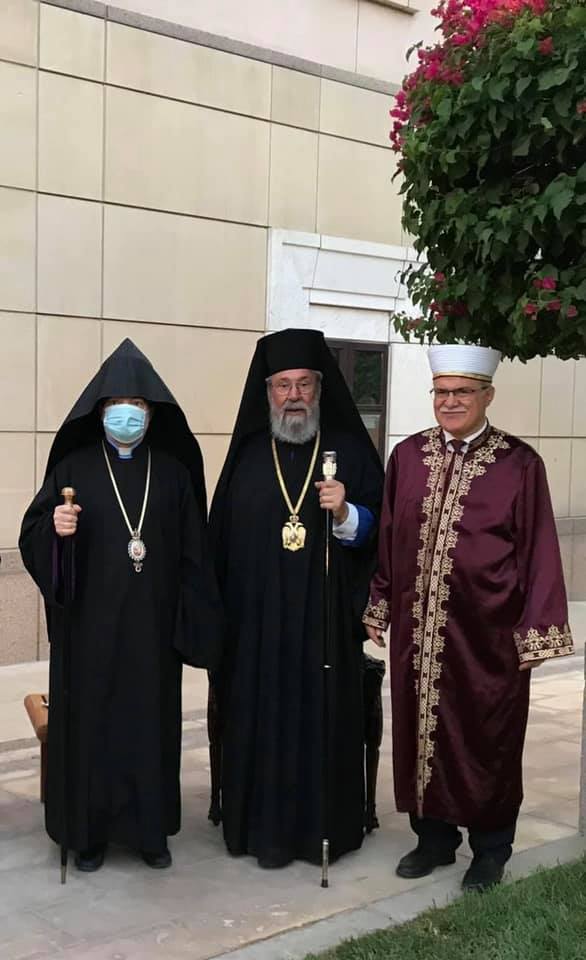 Message by the Mufti of Cyprus, Dr Talip Atalay
On behalf of all Muslims in Cyprus, I express my deepest sorrow for the devastating wildfire in the foothills of the Troodos Mountains and Limassol, described as the worst in Cyprus history. We have been following the tragic news and assure every one of our thoughts and prayers.
We are encouraged with the reports of rescuers coming together to help all who are in need. We pray for them, the firefighters and everyone who has come forth to help those in need. We are especially sorry for the loss of life and express our sincerest sympathies to the families of the victims. May Allah Almighty grant patience, courage and peace to them.
We regret the news of animals burnt to death, injured and hurting, the loss of property and the utter destruction of nature. The tragic loss of rich forests and wildlife including all animals pains us all. Natural environment is the foundation for life and humanities common heritage. We should take care of them together and help one another to overcome the harsh consequences of the destruction and death.
As Muslims of Cyprus, we stand ready to help now and later for the recovery process in any way we can.
May Allah be with everyone and have mercy!
Prof. Dr Talip Atalay
Mufti of Cyprus 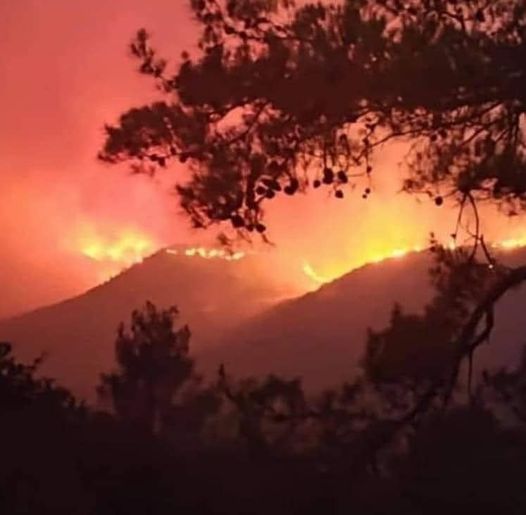