Faced with such trials as the coronavirus pandemic (COVID-19), when there is global fear and confusion, the Religious Leaders of the main faith communities of Cyprus H.B Archbishop Chrysostomos II of Nova Justiniana and All Cyprus, H.E Talip Atalay, Mufti of Cyprus, H.E Archbishop Khoren of the Armenian Apostolic Orthodox Church of Cyprus, H.E Archbishop Youssef Soueif of the Maronite Church of Cyprus and Reverend Father Jerzy Kraj, the Latin Patriarchal Vicar of Cyprus, who form the Religious Track of the Cyprus Peace Process (RTCYPP) join their voices and prayers to the Almighty to help the world overcome this crisis, protect everyone and heal the sick.

During this unprecedented period, the Religious Leaders of Cyprus call everyone to pray fervently, act compassionately and remain in solidarity with each other especially with the most vulnerable among us.

Special prayers are called for all who have been afflicted or recovering from this illness and everyone who is caring for the sick so that God may grant them the grace of His healing. In particular, they call for prayers for the sick, the victims who passed away due to this virus and uplift all doctors, nurses, medical, paramedical personnel and all caregivers who are struggling daily to confront the consequences of this virus.

They call on all other religious and faith community leaders in Cyprus and all sisters and brothers of faith to join them in prayer and action to fight this pandemic together. They jointly urge all faith communities to strictly follow the advice and directives issued by the World Health Organisation (WHO) and state health authorities, remain responsible and hopeful without succumbing to fear and panic.

They call on their faithful to pay very serious attention to the separate detailed directives and measures announced by each one of them and stay updated. They invite everyone to stay correctly informed and face this crisis with faith, caution, wisdom and collective responsibility so as to help curb its spread.

The Religious Leaders of Cyprus assure everyone that they will continue to pray for everyone and invite their respective faith communities to join them in prayer to strengthen their faith in God the Almighty during this difficult time. 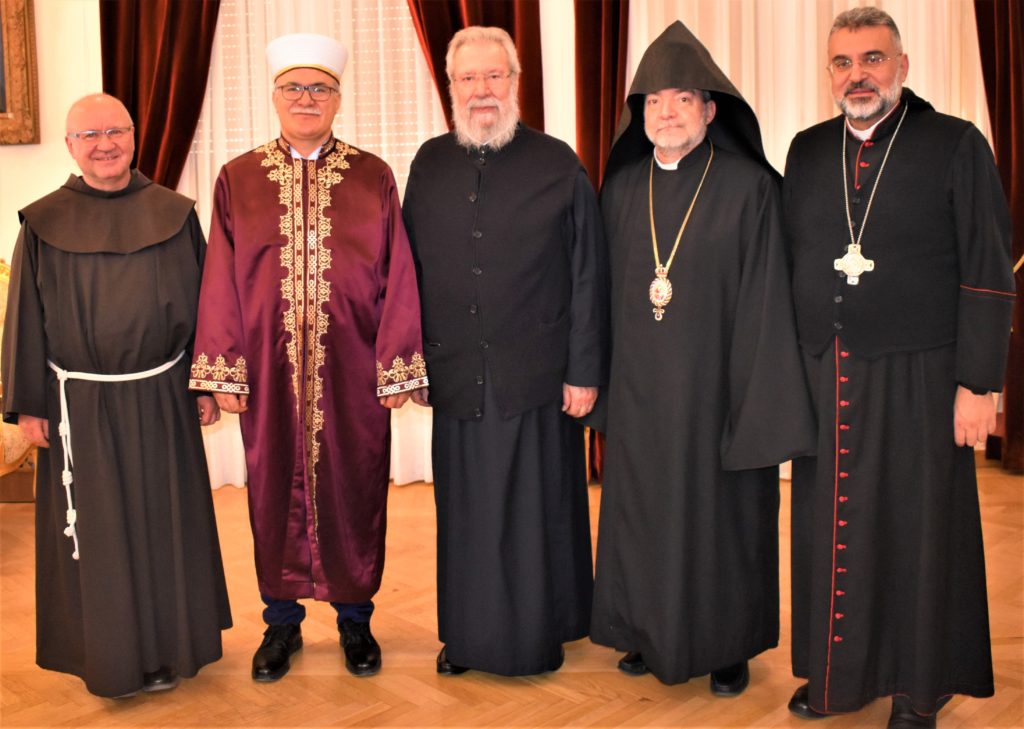 On 14 February 2020, the five Religious Leaders of Cyprus came together and adopted the Joint Communique on the occasion of the tenth anniversary of the Religious Track of the Cyprus Peace Process (RTCYPP) under the Auspices of the Embassy of Sweden. The Religious Leaders commit themselves to continue to build a culture of peace and trust, always defending and promoting human dignity and reiterate their conviction to work together to uphold and advance the fundamental freedom of religion for all.

"Ten years ago, after decades of separation, we, the religious leaders of Cyprus, came together for the first time in the history of Cyprus.  We started to listen to one another, to work together and to support each other to improve the situation for freedom of religion or belief in Cyprus and together contribute to healing and reconciliation of our communities.

We are convinced that if we want to go far, we need to walk the long road ahead of us together as people of faith and as religious leaders.

We give thanks to the Government of Sweden for its steadfast support to the Office of the Religious Track of the Cyprus Peace Process (RTCYPP) and the Embassy of Sweden in Cyprus for its Auspices.

We reiterate our strong conviction to continue to work together to uphold and advance the fundamental freedom of religion for all. We know full well that only with real courage we will be able to stay together to seek truth, purify memories and restore basic human rights. In particular we will continue to advocate and work together for our right to access, administer, protect and restore our own religious monuments in Cyprus and stand up for the right to worship, which has been denied, controlled or violated for far too long.

With God’s grace and blessing we will continue to support each other and stand united to contribute to building trust between our communities, restore broken relationships, heal the wounds of the past and sow the seeds of reconciliation in Cyprus.

To mark the tenth anniversary of our peacebuilding efforts, we call on:

All Cypriots to join us in our efforts to protect the religious heritage of Cyprus and advance freedom of religion for all;

The political leadership of Cyprus to have the courage to increase their support to our unprecedented joint gesture for peace, as well as our common request to ensure unhindered freedom of worship, religion and belief in Cyprus; and

The international community to support our joint messages for human rights and continue to acknowledge the role of the religious leaders of Cyprus in peacebuilding.

We, the Religious Leaders will continue to pray for Cyprus and for each other. We invite our respective communities to join us in prayer to strengthen our faith in God the Almighty and commit ourselves to building a culture of peace and trust, always defending and promoting human dignity."

We, the religious leaders of the five main faith communities of Cyprus, Greek Orthodox, Muslim, Armenian Orthodox, Maronite and Latin Catholic, who form the Religious Track of the Cyprus Peace Process under the Auspices of the Embassy of Sweden, are deeply concerned that violence against women and girls continues to be one of the most pervasive manifestations of discrimination against women in Cyprus. This includes economic, psychological, sexual, and physical violence.

We acknowledge with pain that violence against women affects women and girls of all ages, religions and ethnic backgrounds. Violence undermines women’s dignity and integrity and has devastating effects on the lives of women and girls with severe consequences on families, communities and societies. As long as it persists, the world cannot claim to be making real progress towards equality, development and peace.

We reiterate our common belief that men and women have equal value in the eyes of God. Christianity and Islam condemn violence against women. Violence against women and girls, in whatever form, is a contradiction to the will of God and unacceptable in His eyes.

We strongly believe that religious leaders don’t only have a responsibility but also a religious duty to stand united against violence in all its forms everywhere, including violence against women and girls.

Therefore, as Christian and Muslim religious leaders of Cyprus:

We strongly condemn violence committed against women and girls and express our commitment to share this message with our respective faith communities and society as a whole.

We pray for healing and wholeness and reach out to all women and girls that have fallen victim to violence.

Archbishop of Nova Justiniana and All Cyprus

JOINT STATEMENT OF THE RELIGIOUS LEADERS OF CYPRUS, AGAINST ALL FORMS OF ATTACKS, TERRORISM AND VIOLENCE

We, the religious leaders of the five main faith communities of Cyprus, Greek Orthodox, Muslim, Armenian Orthodox, Maronite and Latin Catholic, who form the Religious Track of the Cyprus Peace Process under the Auspices of the Embassy of Sweden, committed and working all together for human rights and peace in Cyprus, express our united voice against all forms of attacks, terrorism and violence in our country, region and the world at large.

United in one voice we reiterate that as religious leaders we pray first and foremost for all victims everywhere, their families and friends and with all those who are mourning all over the world.

We are horrified to see the increased appalling violence against innocent civilians in our region and beyond, with victims including children, women and the elderly. Growing numbers of refugees from our region are risking their lives daily, facing hostilities, rejection and death. We are with them in deep compassion and prayer.

We categorically condemn all forms of violence against innocent civilians. No war, no act of terrorism, atrocities or violent attacks against innocent people can be justified in the name of God Almighty or any religion or humanity. War begets war. Violence begets violence. All people of good will must stand together to respect, support and care for one another. Violence in the name of God is violence against religion itself.

As religious leaders we have a responsibility not only to speak out and work united against all forms of violence but also understand and address diligently the root causes that lead to such conflicts, violence and wars and to always promote and protect peace.

Our sacred texts call us not only to combat injustice but also to uplift the poorest in our midst. Where inequality is entrenched, instability and conflict are far more likely to erupt. Inspired by our shared values we embrace the moral imperative to reach out to the most vulnerable among us, uphold human dignity and advocate for human rights.

The dialogue we have experienced together has strengthened our conviction that there is no future without tolerance, mutual understanding, respect and peaceful co- existence.

With our different identities we have to be together as one human family, as people of every faith or none. We have a responsibility to preach, act and show that our shared respect for human life and dignity is stronger than evil acts of terror, and perversion of religion.

Together we reaffirm the need to all uphold democratic, intercultural and human rights values that have been attacked recently in Ankara, Sinai, Beirut, Paris, Yola and Bamako.

Let us recommit our care and hospitality to those fleeing violence, oppression and war.

Let us be compassionate and walk humbly with our God on the way of love, mercy, justice and peace.

JOINT STATEMENT ON THE RESUMPTION OF PEACE TALKS

As religious leaders of Cyprus, we warmly welcome the joint communique of the political leaders of the two communities.

We are encouraged by the joint message of the political leaders that the status quo is unacceptable, that human rights and fundamental freedoms as well as each other ́s distinct identity and integrity should be respected. We welcome their expressed determination to resume negotiations in a result- oriented manner. We expect them to reach a settlement as set out in the joint communique of February 11 2014 and support our efforts to build confidence.

Cyprus has centuries ́ long experience of Christians and Muslims living, working and worshiping side by side in harmony.

Religion was and still is a victim of the protracted conflict. For too many decades we were not able to meet, to listen and to understand each other. For the last years we have agreed to meet regularly, openly express our respect and listen to one another. Our encounters have helped us to get to know each other and understand the other’s needs. Together we have tried to find practical solutions, build trust and confidence and succeeded.

We see our responsibility to ensure that the political conflict is resolved and we believe that there is no alternative to communication, co-operation and co-existence.

Working together, seeking to overcome differences and supporting each other are obligations for people of faith and tools to promote faith when there is doubt, love where there is hatred and hope to overcome despair.

Our faith in God is our hope. It is to Him we turn. For nothing is impossible with God.